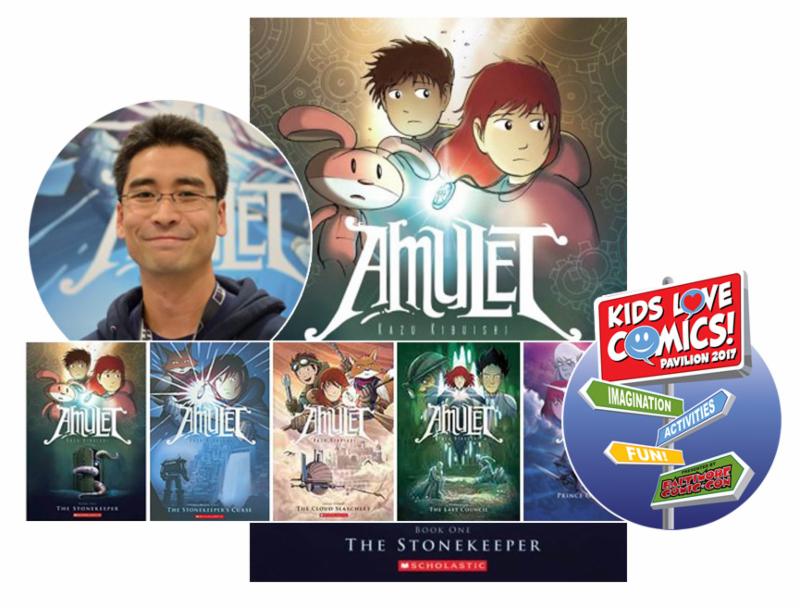 New York Times bestseller Kazu Kibuishi’s magical graphic novels have taken the book world by storm, and now that magic is coming to the Baltimore Comic-Con September 22-24! Mr. Kibuishi will be on hand all weekend (Booth #3013 in the Kids Love Comics Area) to meet his fans, sign his books, and share his process in creating graphic novels. Copies of Mr. Kibuishi’s books will be available for purchase if anyone forgets to bring a copy to have signed!

Kazu Kibuishi, creator of the Amulet graphic novel series and the cover artist for the anniversary edition of Harry Potter, comes to Baltimore Comic-Con as part of Kids Love Comics.

Ask any class of kids across America about the graphic novel series Amulet, and you will probably hear an excited description of adventure, kid heroes, and amazing creatures, all said with a big smile. Featuring magic, elves, robots, demons, and anthropomorphic animals, Amulet has become a bright light for reluctant readers and excited book lovers alike.

Kibuishi will be giving FREE talks on his process of creating comics on Saturday at the Baltimore Comic-Con, as part of the perennial convention’s Kids Love Comics educational and entertainment initiative.

“Baltimore Comic-Con is not only a wonderful comic convention,” said John Gallagher, Kids Love Comic Executive Director, “it’s an incredible, family-friendly event. Kazu’s inclusion at the show is a natural progression of BCC’s dedication to inspiring young people to read and enjoy the magic of comics.”

Mr. Kibuishi’s programming (just a part of the weekend-long kids programming and classes) at the show is as follows:

You are cordially invited you to the Panel Party, where your imagination, storytelling ability, and art skills will be welcomed and celebrated. Simply put, we are going to have a blast making comics together! Warning: attending this party may result in you throwing your own Panel Party at home!

Presentation and Q&A with author Kazu Kibuishi on the creation of the Amuletgraphic novel series for Scholastic Graphix. Explore the process of creating adventures for all ages!