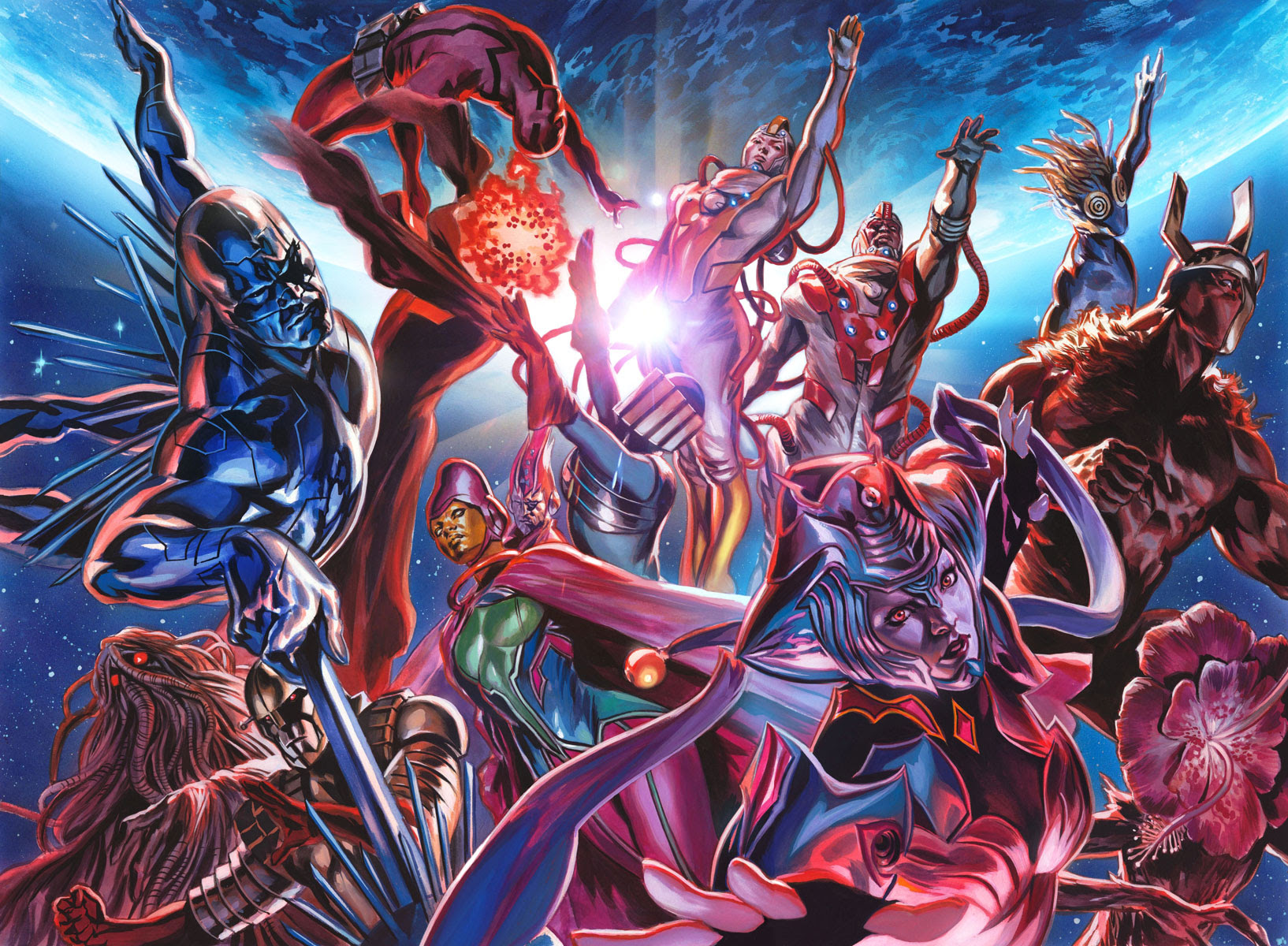 This October, Valiant unveils a new plane of existence beyond our own and unleashes a universe of new worlds, new beings, and new myths…

Available only as a pre-order set!

The ETERNITY #1-4 PRE-ORDER EDITION BUNDLE – four 40-page, massively expanded editions of Valiant’s all-new visionary series – can only be ordered as a set and must be ordered with your local comic shop by the initial order date of August 24th, 2017! Released monthly from October 2017 through January 2018, each PRE-ORDER EDITION comes packed with trade paperback-style extras and bonus content, including creator commentary, behind the- scenes looks at the creation of the comics, process character designs and artwork, and first looks at upcoming issues – plus an exclusive cover by interior artist Trevor Hairsine that can’t be found anywhere else!

The only way to obtain these exclusive items is to pre-order all four issues with your local comic shop by the initial order date of August 24th, 2017! No more copies will be made available beyond that date and subsequent issues will not be offered in later solicitations!

Today: Ray Garrison and his true love, Magic, thought they had left their days of tumult and violence behind them as they raise their newborn daughter, Jessie, in the quiet isolation of the countryside… Until Magic’s father – the depraved cultist simply named “Daddy” – seeks to bring his wayward progeny back into his flock by any means necessary. Now, torn between the family that loves him and the rage within, the walking weapon of war once called Bloodshot is about to give in to revenge…

Meanwhile: In the near future, can Magic and the now-adolescent Jessie outmaneuver the nanite-infused killer called Rampage long enough to answer the question that has haunted them for years… Whatever happened to the man they both loved? Whatever happened to Bloodshot? 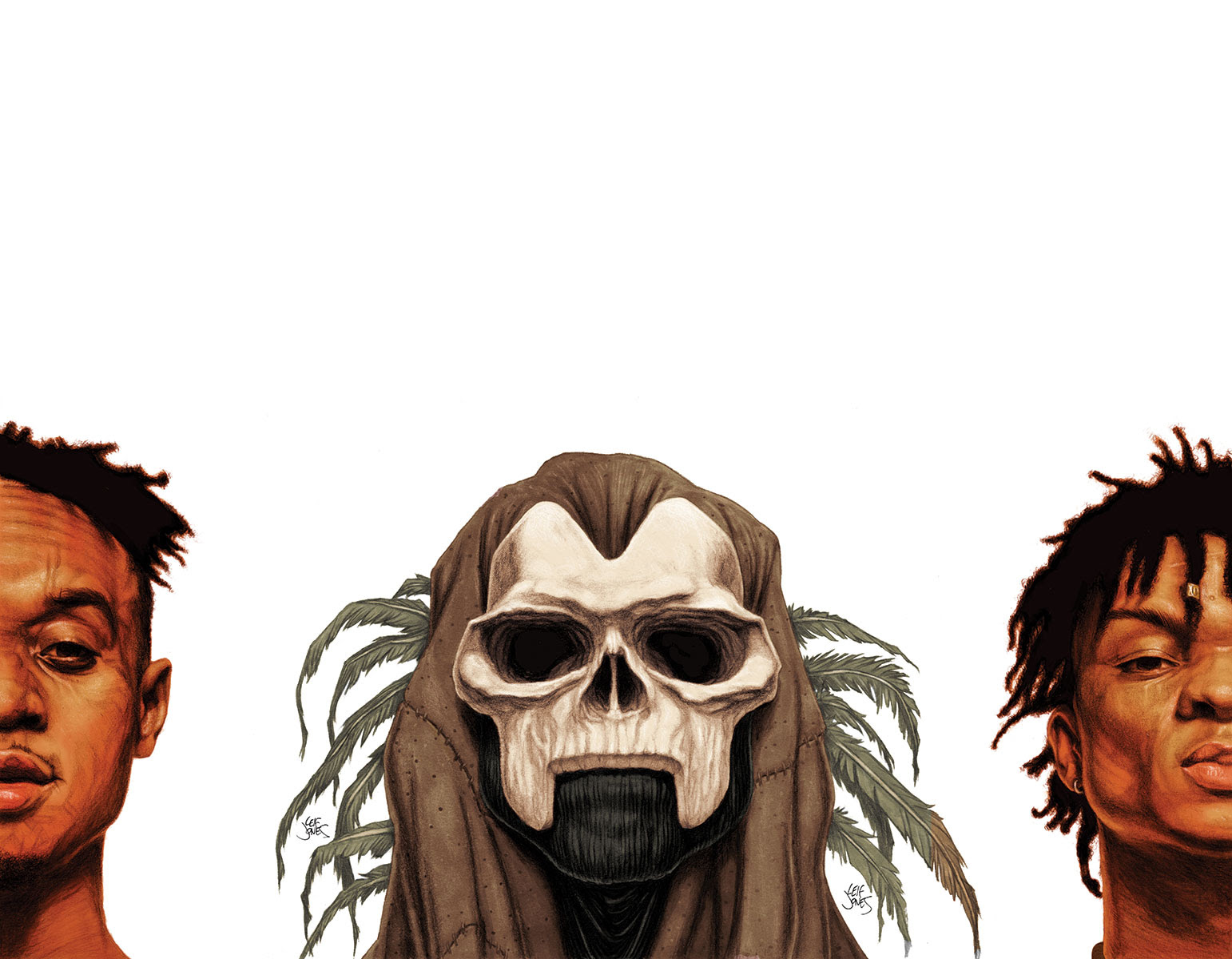 The comics crossover event of 2017! Valiant’s superhero icon meets Rae Sremmurd, the multiplatinum hip-hop superstars behind the #1 hit “Black Beatles,” for an unforgettable showdown at the crossroads of life and death!

Before they were dominating the music charts and selling out stages worldwide, Slim Jxmmi and Swae Lee were just a pair of talented, but otherwise ordinary, brothers…until a twist of fate delivered them fame and wealth beyond their wildest imagination. Now, years later as hip-hop duo Rae Sremmurd, the brothers are bound for New Orleans…and an otherworldly encounter with the supernatural guardian called Shadowman, the lone line of the defense between our world and the Deadside that lies beyond…

The Valiant Universe collides with two of the most influential artists in hip-hop today as Shadowman and Rae Sremmurd come face to face to forge a new legend of fame, fortune, and magic – as told by rising star Eliot Rahal (BLOODSHOT’S DAY OFF) and renowned artist Renato Guedes (Wolverine)!

War has returned to the world of Gorin – but, this time, the planet’s ravaged armies face a threat from the stars, not within! Now, as the intergalactic assault reaches a critical peak, it falls to Gorin’s newly coronated emperor, Aric of Urth, to fortify not just a kingdom, but an entire world! With his sentient armor to aid him, the earthborn warrior once known as X-O Manowar will confront the conquering force known as the Mono Men on the field of battle…but if he doesn’t act fast, his reign will end just as quickly as it began!

As the only force standing between her tribe and total extinction, War Mother must protect every man, woman, and child…no matter the cost…as she braves the long journey across the mutant-infested jungles and irradiated steppes once known as South America. But when this sworn guardian discovers that the new homeland she seeks might not be the haven it was promised to be, she’ll have to save her people from the one thing she never could have anticipated: themselves!

As “MASSACRE” continues to tear the Harbinger Renegades apart, the battle lines reveal themselves… On one side, the fugitive psiot named Alexander Solomon and the concussive killers of the H.A.R.D. Corps…and on the other, the Harbinger Renegades and a growing army of newly activated recruits – untrained, unpredictable and potentially unstable. As their paths converge toward an inescapable confrontation, Peter Stanchek will be forced to make an impossible decision that will change the destiny of everyone in the Valiant Universe…and lay the fault lines for HARBINGER WARS 2!

Bloodshot was a bust… Divinity didn’t work… Ninjak was nixed… No matter which of the Valiant Universe’s greatest heroes she recruits to her aid, Faith still can’t save the time stream! With time literally running out all around her, does L.A.’s sky-soaring superhero have what it takes to defend the entire universe…or will the secret key to saving existence itself come from the most darkest and most unexplored avenue of all?

On a scarred landscape, two otherworldly armies prepare to battle one last time, vying for control of a massive tower named from an ancient language no longer permitted to be spoken.

One army is led by a primeval force named Babel, whose goal is singular: to breach “Heaven” no matter the cost. The only thing standing in his way is a gray-haired barbaric warrior, filled with rage and regret, a man who sees this battle as his last chance for redemption. But he knows his depleted forces have little chance of victory unless aid comes.

Enter Tama: A 12-year old girl on the crest of a hill overlooking the battle, who has just become humanity’s only hope. The last in an ancient line of mystics who protect the Earth, she has foreseen this battle and knows millions will perish if she’s unable to stop it. Now Tama and her ragtag team of malcontents – Ninjak, Shadowman and Punk Mambo – must somehow defeat an elder god hell bent on piercing the heavens.

New York Times best-selling writer Matt Kindt (X-O MANOWAR) and artistic sensation CAFU (RAI) lead a Tolkien-esque journey into the space between life and death…through the Deadside… and into the many worlds that lie beyond right here with a spellbinding and horrific standalone volume!

Stranded on a mysterious desert island, Bloodshot is running for his life! But as he tries to make sense of his surroundings, he’s quickly discovering that this is no ordinary tropical getaway… Surrounded by decommissioned relics of the same bloodstained project that created him – World War II Bloodshot, Cold War Bloodshot, Vietnam Bloodshot, and other antiquated experiments – Bloodshot is about to find out where Project Rising Spirit sends its old soldiers to die. Can this seasoned band of killers trust each other long enough to survive the threats that lie in the jungle around them…and unlock the secret at the heart of the island’s existence before they’re each permanently retired? And who or what is the sinister force called DEATHMATE that now hunts them at every turn?

For more information, visit Valiant on Facebook, on Twitter, on Tumblr, and at ValiantEntertainment.com
For Valiant merchandise and more, visit ValiantStore.com