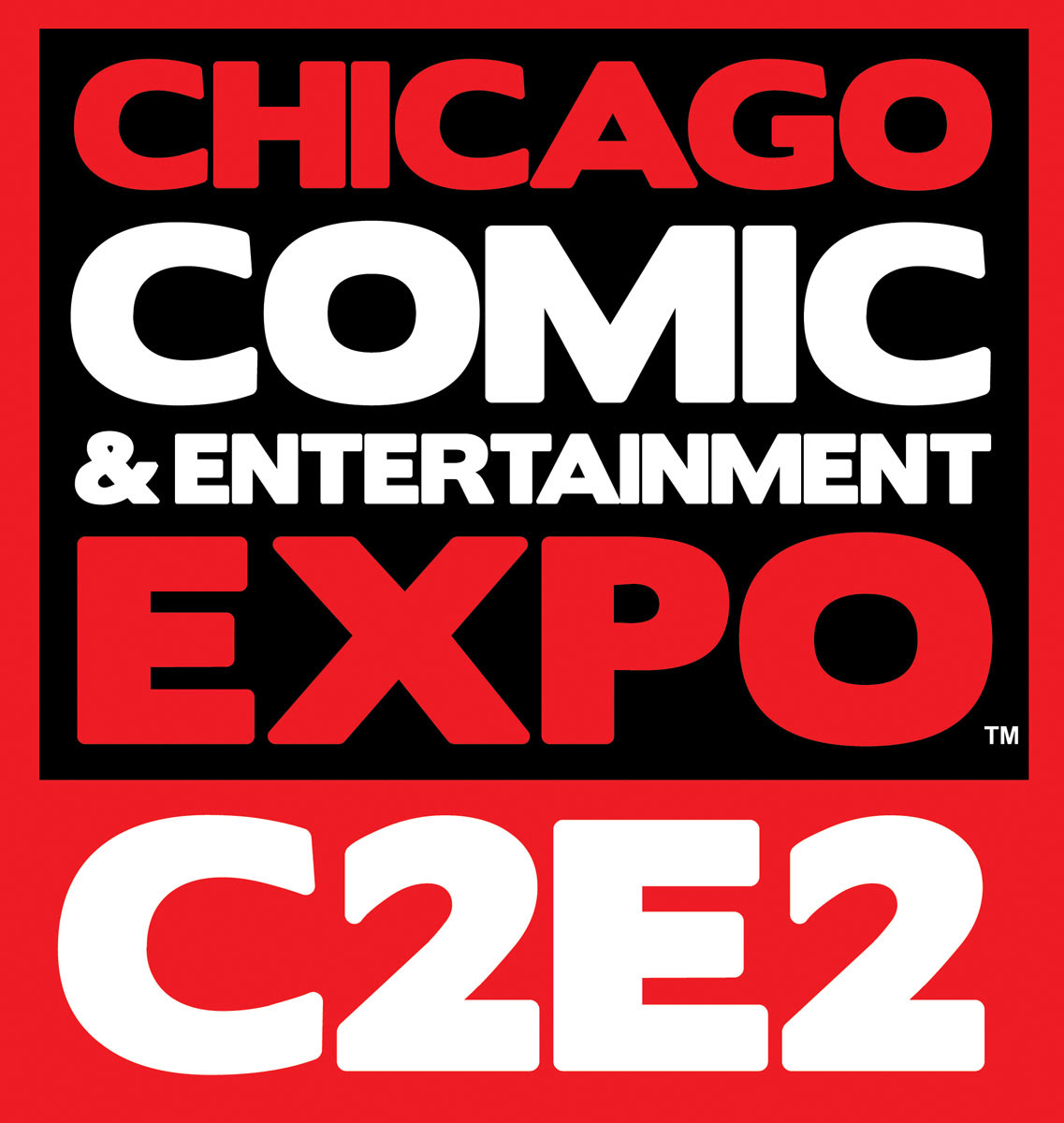 From Friday, April 21st through Sunday, April 23rd, Valiant is bringing its cross-country convention road show to Chicago, IL for C2E2 2017 – and we’re unleashing a non-stop line-up of exclusives, programming, panels, and parties to celebrate!

All weekend long, join Valiant inside Chicago’s McCormick Place at Booth #317 to find out why Valiant is forging the 21st century’s most acclaimed superhero universe with a complete selection of paperbacks and deluxe hardcovers for critically acclaimed and award-winning titles including BLOODSHOT REBORN, BRITANNIA, FAITH, HARBINGER RENEGADE, QUANTUM & WOODY, SAVAGE and many more!  And don’t miss the wallet-busting lineup of irresistible Valiant merchandise featuring X-O Manowar, Bloodshot, Faith, and more of your favorite Valiant superheroes!  And don’t miss the convention debut of brand-new finely sculpted ceramic mugs from Surreal Entertainment, featuring two of the Valiant Universe’s biggest icons, X-O Manowar and Bloodshot! [$40 per set] 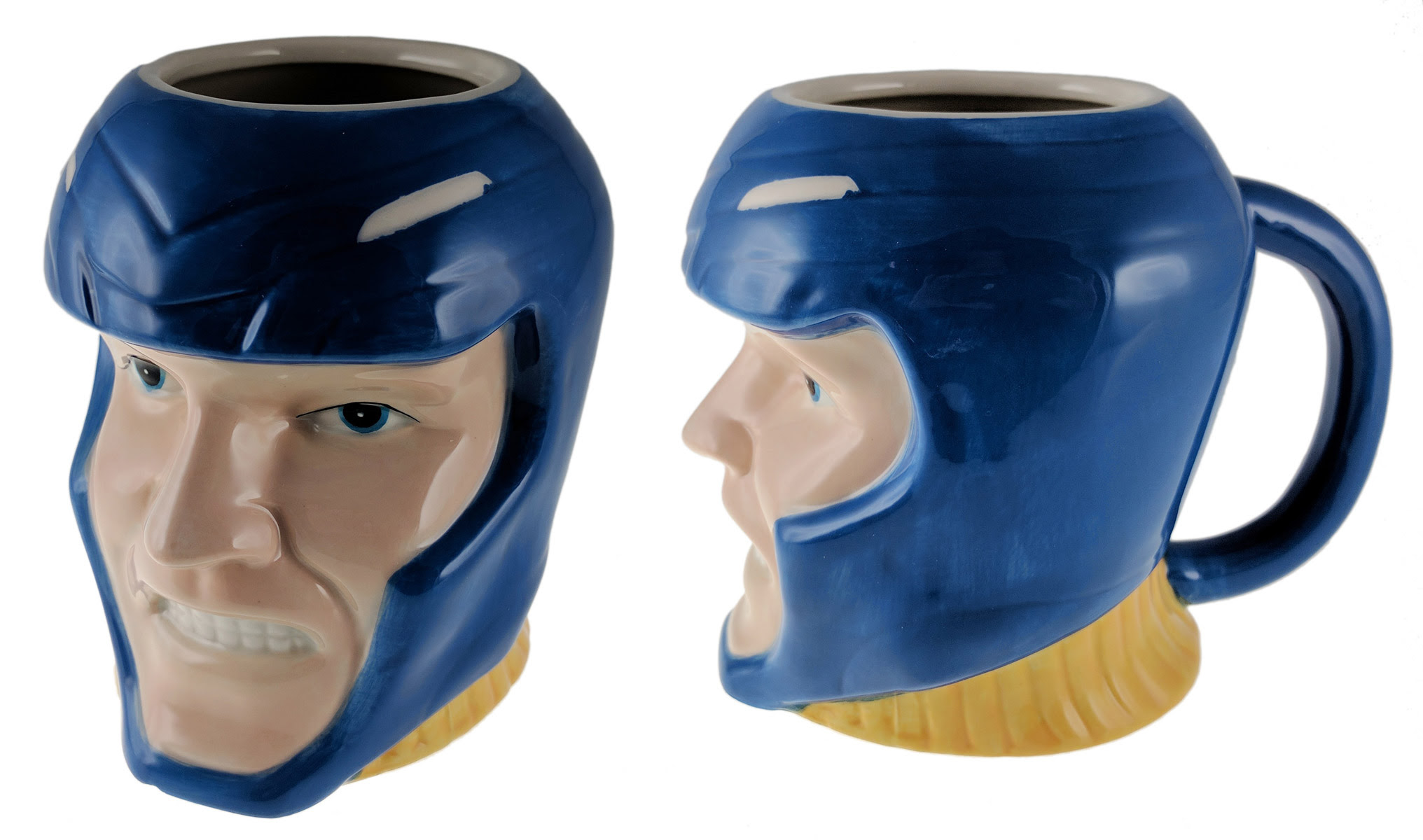 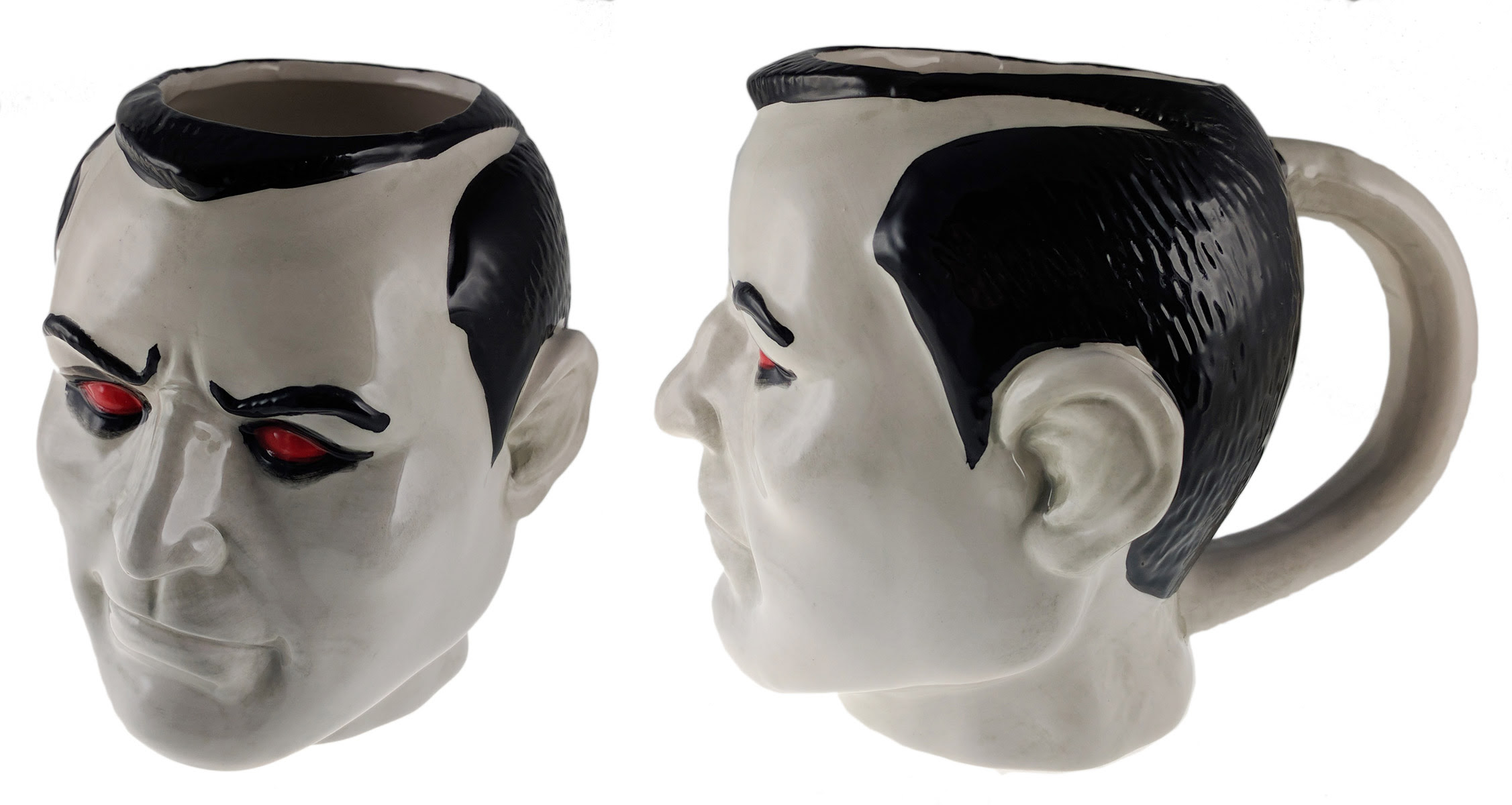 Then: explore the future of Valiant’s leading icon on Friday, April 21st at 5:30 p.m. CT in room S405A for the VALIANT: 25 YEARS OF X-O MANOWAR panel presentation! This spring, Valiant marks 25 years of its most enduring comic book icon as best-selling writer Matt Kindt and a rotating cast of powerhouse interior artists launch a stunning new beginning in the all-new X-O MANOWAR #1! Now, right here at C2E2, join a blockbuster roundtable of Valiant staff and creators for an in-depth discussion of X-O Manowar’s landmark place in comics history…and a special look forward at what awaits the must-read new series of 2017!

Next: the Valiant Universe leaps off of the comics page and onto the cutting edge of superhero storytelling on Saturday, April 22nd at 6:30 p.m. CT in room S405B for the VALIANT DIGITAL: NINJAK VS. THE VALIANT UNIVERSE AND BEYOND panel presentation! Join star Jason David Frank and Valiant’s own Josh Johns and Dinesh Shamdasani as they collide MI-6’s deadly assassin against a gauntlet of Valiant’s most formidable heroes with new footage from NINJAK VS. THE VALIANT UNIVERSE – the bone-shattering, live-action series coming in 2017 – and more news and announcements about all-new VALIANT DIGITAL projects! And stick around for a free exclusive print at the end of the panel!

Finally: the road to Valiant’s biggest, most ambitious and most impactful comic book event of all time starts right here at C2E2 with a superstar cast of Valiant creators and staff on Sunday, April 23rd at 12:15 p.m. in room S405B at the VALIANT: THE ROAD TO HARBINGER WARS 2 panel presentation! Jump on board here to find out what the future holds for HARBINGER RENEGADE, X-O MANOWAR, BLOODSHOT, FAITH, DIVINITY, NINJAK, and the rest of Valiant’s most powerful heroes…and how the coming of HARBINGER WARS 2 will soon be felt across the entire Valiant Universe with never-before-seen artwork and announcements! 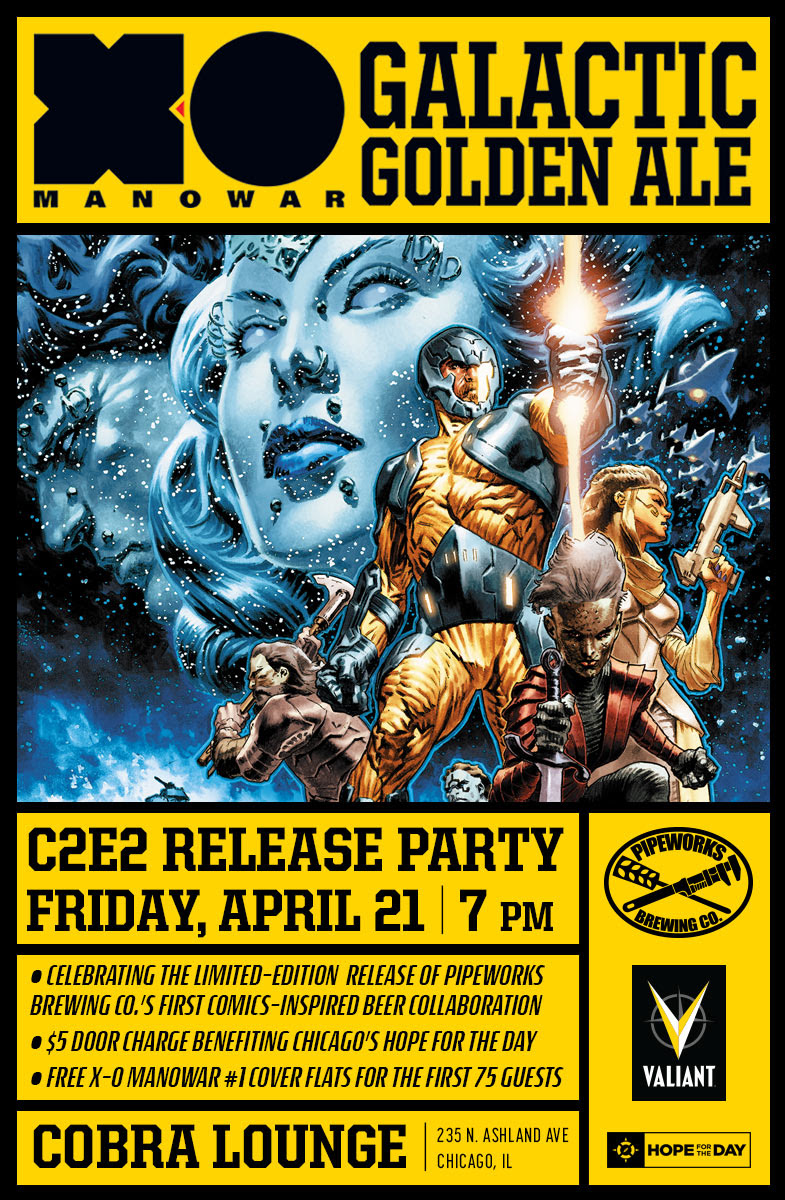 Co-sponsored by Valiant Entertainment, Pipeworks Brewing Co., and Hope for the Day, the first 75 party-goers will receive a strictly limited X-O MANOWAR (2017) #1 cover flat – a rare, unbound comic cover pulled directly from the printing press and signed by Valiant staff and creators! Portions of the proceeds from the party’s $5 door charge and all pints of X-O MANOWAR GALACTIC GOLDEN ALE poured will be donated to Hope for the Day, supporting their suicide prevention outreach and mental health education projects. RSVP online at Facebook or Eventbrite.

We’ll see you in the Windy City! And don’t miss a moment of the excitement as Valiant’s one-of-a-kind convention road show marches on through Los Angeles, Kansas City,  Houston, and more throughout the spring!

* Stay tuned for more dates to be announced all year long!* 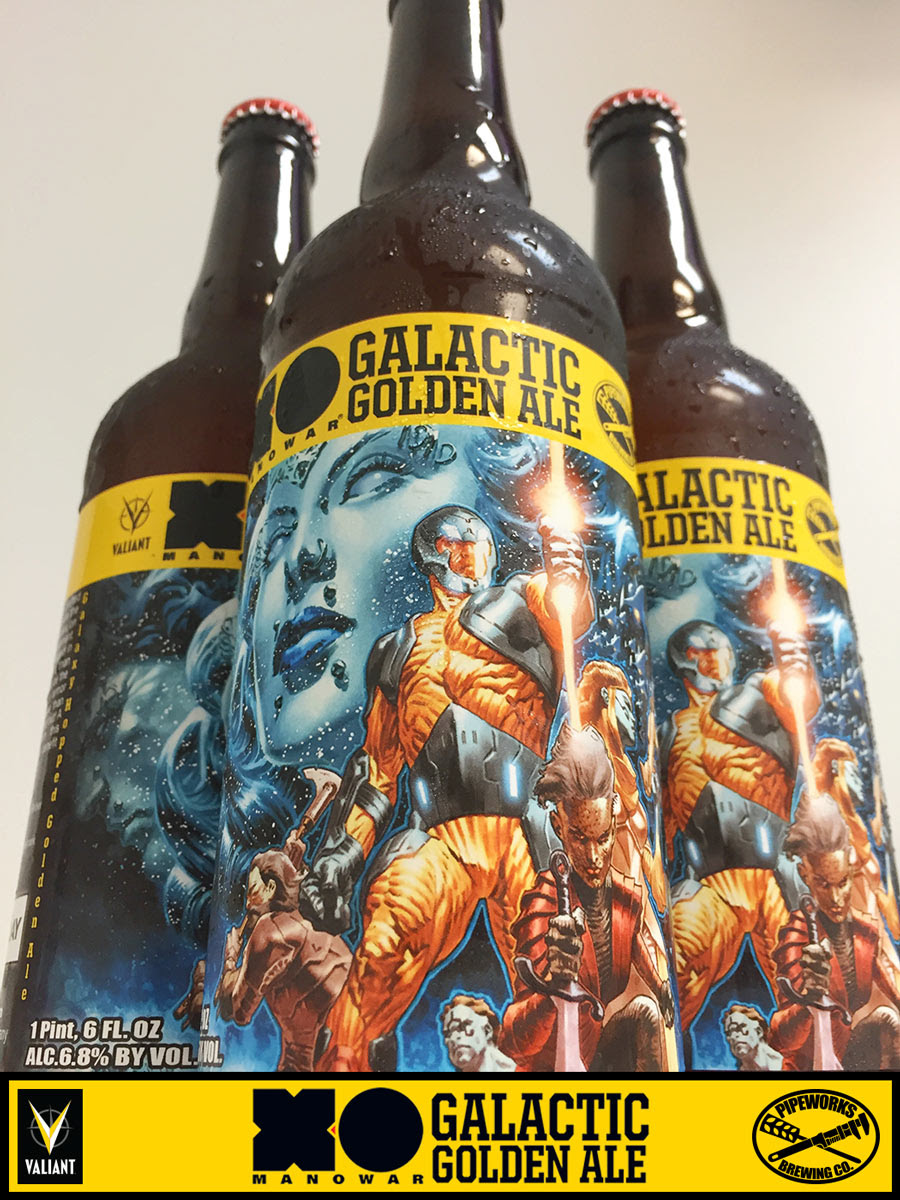 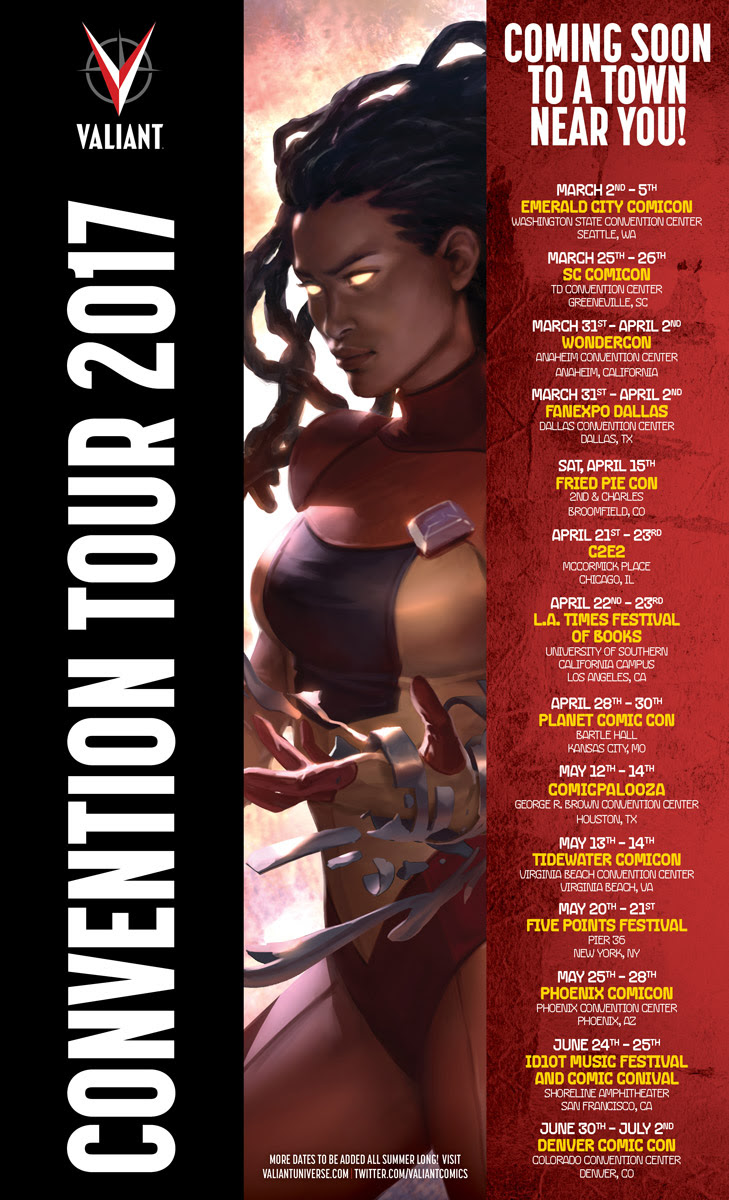