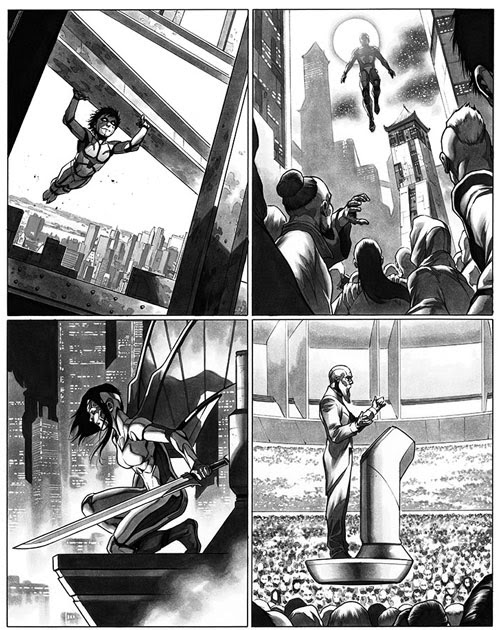 As revolution courses through the year 4001 A.D., uncover the long-hidden history of Rai’s rise through the ages…and the secret origin of the Valiant Universe’s greatest lineage of heroes!

Valiant is proud to present your first look inside RAI #14 – the next planet-shaking installment of “THE SUMMER OF 4001 A.D.” from New York Times best-selling writer Matt Kindt (4001 A.D.) and Valiant-exclusive superstar CAFU (UNITY)! On June 22nd, the mantle of Rai passes on to New Japan’s latest champion! But in the formative years of Father’s dark utopia, will New Japan’s newly inaugurated guardian clash against her Father’s despotic doctrine…or endure the sacrifice required to forge a better future?

For the first time ever, witness the violent foundation of Father’s space-born utopia of New Japan…and, with it, the shocking genesis of the line of guardians that bear the name Rai! Born and bred by Father to enforce peace at any cost, follow the next Rai and their successors across two millennia as they chronicle the history of 4001 A.D. – from the launch of New Japan into orbit to the latest Rai’s crusade to bring it crashing back down to Earth!

On June 22nd, New Japan comes to life with blood and sacrifice as the origin of New Japan reaches a sinister new chapter that will reshape everything you thought you knew about the 41st century! Be here as Matt Kindt and CAFU reveal the forgotten history behind “THE SUMMER OF 4001 A.D.” with a stunning new entry point into 2016’s acclaimed crossover event, only in RAI #14 —featuring covers byDavid Mack (Fight Club 2), Andres Guinaldo (Nightwing), and Ryan Lee (Inhuman)!

Encompassing the core 4001 A.D. event series, the return of Valiant’s acclaimed RAI ongoing series, and four all-new one-shots revealing the future incarnations of the Valiant Universe’s most iconic heroes, “THE SUMMER OF 4001 A.D.” is the biggest and most visionary Valiant event to date – and a perfect introduction to the largest independent superhero universe in comics today.

It all starts here on May 4th in 4001 A.D. #1 (of 4) – the FIRST ISSUE of the all-new, standalone event series following Rai and the 41st century’s most formidable heroes into the fight against New Japan from New York Times best-selling writer Matt Kindt (DIVINITY II) and superstar artists Clayton Crain(Carnage) and David Mack (Daredevil)!

Then, “THE SUMMER OF 4001 A.D.” explodes with the return of Rai’s award-winning ongoing series inRAI #13 – the FIRST ISSUE of an ALL-NEW JUMPING-ON POINT revealing the origin of New Japan and its very first guardian! Discover the essential history behind the dawn of 4001 A.D. here as New York Times best-selling writer Matt Kindt (NINJAK) and acclaimed artist CAFU (UNITY) unearth the answers behind Father’s tyrannical rise to power. How did New Japan come to orbit Earth? Who created Father? And just what is Rai’s true nature…and what happened to his nine earlier predecessors that once patrolled New Japan in his stead? Discover the shocking answers as RAI #13 returns to set the events of 4001 A.D. in motion – and reveals the epic arc of the Valiant Universe’s future history!

Plus: “THE SUMMER OF 4001 A.D.” escalates even further as a staggering cast of superstar talents come aboard to reveal what the 41st century holds for Valiant’s most iconic heroes in a new series of four indispensable one-shots! Featuring X-O Manowar, Bloodshot, Shadowman, and the debut of an all-new, top-secret character with a crucial tie to the present and future of the Valiant Universe, “THE SUMMER OF 4001 A.D.” erupts into full force here with four new chapters from Valiant’s most acclaimed creators, ripped directly from the pages of 4001 A.D.:

Earth must rise. Father must fall. Rai! Eternal Warrior! X-O Manowar! Bloodshot! Shadowman! Geomancer! And more! The war for the ultimate fate of humanity begins on May 4th in 4001 A.D. #1 (of 4) by superstar creators Matt Kindt, Clayton Crain, and David Mack – and continues all summer long as “THE SUMMER OF 4001 A.D.” rages on!