March 24, 2016
TaylorNetwork
no comment on Valiant Solicitations for JUNE 2016 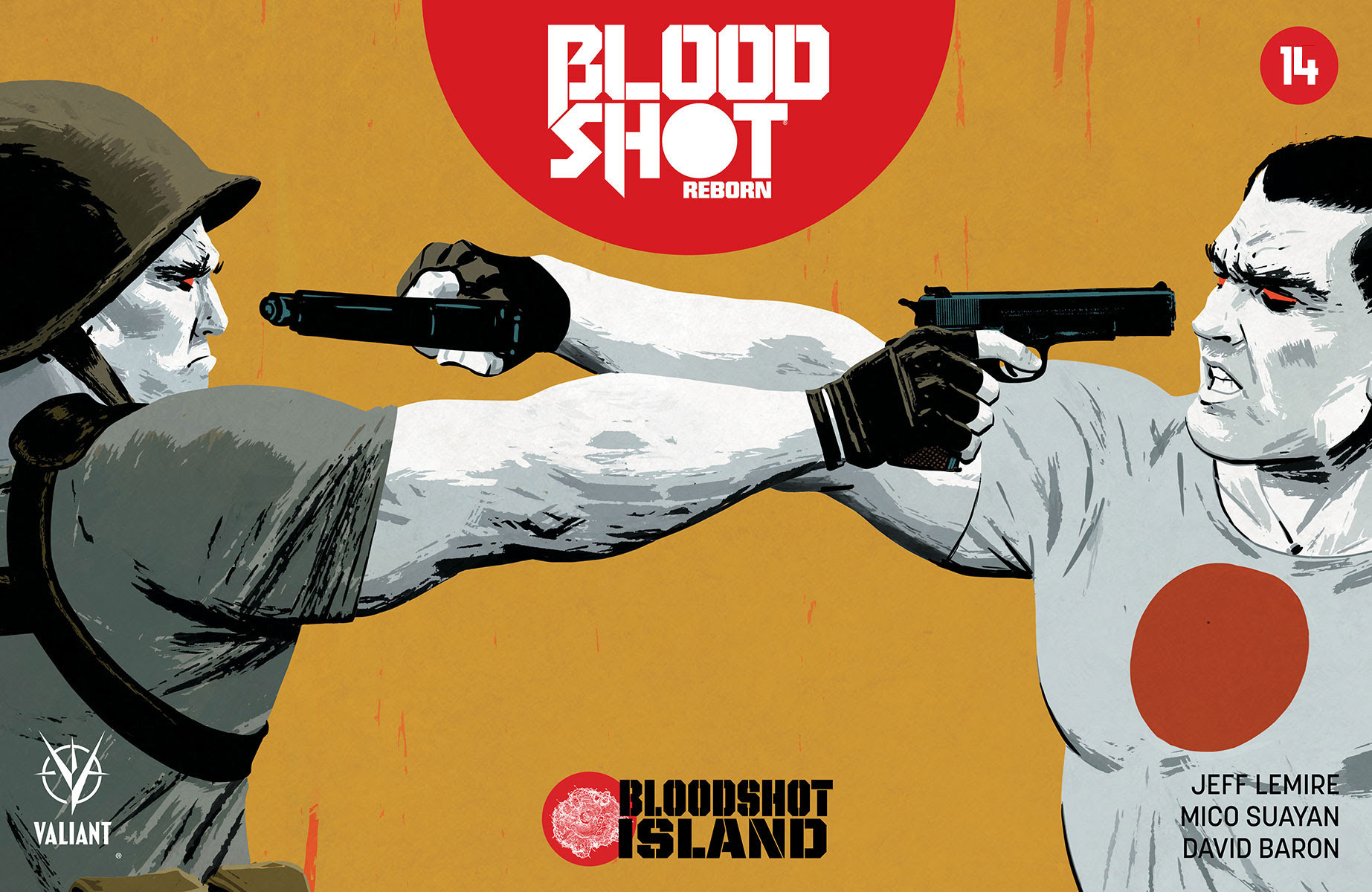 Stranded on a mysterious desert island, Bloodshot is running for his life! But as he tries to make sense of his surroundings, he’s quickly discovering that this is no ordinary tropical getaway… Surrounded by decommissioned relics of the same bloodstained project that created him – World War II Bloodshot, Cold War Bloodshot, Vietnam Bloodshot, and other antiquated experiments – Bloodshot is about to find out where Project Rising Spirit sends it old soldiers to die. Can this seasoned band of killers trust each other long enough to survive the threats that lie in the jungle around them…and unlock the secret at the heart of the island’s existence before they’re each permanently retired? And who or what is the sinister force called DEATHMATE that now hunts them at every turn?

This summer, superstar creators Jeff Lemire (Extraordinary X-Men) and Mico Suayan (BLOODSHOT REBORN) send Bloodshot screaming into his most action-packed adventure yet as “BLOODSHOT ISLAND” ups the ante for the Valiant Universe’s most formidable soldier!

The most ambitious comics event of 2016 brings war to the 41st century – with Rai leading the charge!

Rai is smashing headfirst into New Japan with his team of hardened rebels including the Eternal Warrior and a giant X-O Manowar mech-armor that’s been dormant for centuries! But when Father transforms New Japan into an impenetrable space dragon as a defense of last resort, what hopes will the united heroes of 4001 A.D. have of freeing the citizens of New Japan from Father’s brutal reign? Will Rai have to destroy New Japan…to save it?

Rocketing out of the pages 4001 A.D…the origin of Rai revealed!

For the first time ever, witness the violent foundation of Father’s space-born utopia of New Japan…and, with it, the shocking genesis of the line of guardians that bear the name Rai! Born and bred by Father to enforce peace at any cost, follow the next Rai and their successors across two millennia as they chronicle the history of 4001 A.D. – from the launch of New Japan into orbit to the latest Rai’s crusade to bring it crashing back down to Earth!

Centuries ago, Bloodshot was the man called Ray Garrison. Now, in the year 4001 A.D., Ray Garrison is no more…but the nanites that once thrived inside him endure still. With their master long since gone, the microscopic machines that once drove Bloodshot through every firefight, healed every wound, and calculated every outcome have one final directive left to execute…but what could it possibly be? And how will the forces of the future react when the infamous man-turned-machine called Bloodshot returns to fight another day?

The mysterious figure known only as the Dying One is on a mission to unlock the secrets of the Eternal Warrior’s immortality…and the only way he can accomplish it is to kill him over and over again! Trapped at the heart of a miles-long gauntlet of technologically inflicted cruelties and mechanical terrors designed to dissect, examine and analyze, Gilad has finally been cornered…and he’s about to realize that if he can’t escape, he’ll simply have to survive.

Abram Adams’ former teammate – the long-lost cosmonaut Myshka – has returned from deep space…and, seemingly overnight, the former Soviet Union has taken charge as the globe’s dominant economic and military force. As the Western world grapples with the ensuing chaos and confusion of Russia’s rapid return to power, Divinity and Ninjak attempt to marshal resistance against an empire enabled by the god-like will of one of its own true believers. But nothing escapes the sight of the super-powered gods that now walk among us…and our fate will be forever decided when Myshka targets Divinity for control of our world’s destiny!

Archer and Armstrong – with the help of Mary-Maria and the Sisters of Perpetual Darkness – must stop Bacchus’ cavalcade of terror! Will our heroes be able to defeat this 40-foot foe before the party stops forever? Will Armstrong ever find that bottle of Lagavulin? Will we ever find out who or what Davey the Mackerel is?! The answers to two of these questions might possibly be found in this issue!

Be here as red-hot creators Rafer Roberts (Shutter) and David Lafuente (Ultimate Spider-Man) bring “IN THE BAG” to a close with a bang! Or a snap. However Armstrong’s satchel closes.

“THE SIEGE OF KING’S CASTLE” spirals out of control!

Roku continues to tear down Ninjak’s world brick by brick…and, now, the world’s most dangerous MI-6 operative has just found himself disavowed, out in the cold, and on the run. With no allies left to turn to, can Colin King get his bearings before Roku takes everything – including his life?

New York Times best-selling writer Matt Kindt (DIVINITY II) and rising star Diego Bernard (X-O MANOWAR) pull back the layers of Roku’s plan to destroy her bitterest enemy…and reveal a shocking secret at the heart of Ninjak’s identity here as the walls fall around “THE SIEGE OF KING’S CASTLE”!

From the award-winning team that brought you ARCHER & ARMSTRONG comes a centuries-spanning race against the clock! Join New York Times best-selling writer Fred Van Lente and acclaimed artists Clayton Henry, Francis Portela, and Pere Pérez and to find out why Wired says “this long-overdue series is Ivar’s time to shine…”

At this very moment in Geneva, Switzerland, history is being made. A thousand meters underground inside the Large Hadron Collider, researcher Neela Sethi is about to discover time travel – and jeopardize her life in the process. But she doesn’t know that yet. Ten minutes from now, every deadbeat chrononaut, wannabe conqueror, and misguided protector of the timestream will be banging down her door. Good thing that the legendary Ivar, Timewalker, got there first…right? Now it’s down to history’s most jaded, most tempestuous time traveler to stop the worst of everything that is, was, and will be…before time runs out!

With two kingdoms now under his command, Aric of Dacia has pledged loyalty to his adopted nation – the United States of America – and now America has given him a new mission: destroy the Vine’s network of humanoid alien agents, once and for all. To do it, he’ll have to turn to the one man among us he can trust…his own former enemy, the deadly MI-6 operative called Ninjak!

Jack Boniface died last night. The ruthless Tommy Lee Bones and his band of outlaw escapees from the Deadside have come to pass sentence on the citizens of New Orleans one miserable soul at a time…and they’ve started with the Shadowman! Now, New Orleans needs a new protector, someone with the quick eye, steady hands, and steely nerve needed to kill the dead again. But when the voodoo powers that guide the Shadowman turn to a stone-cold killer with a mysterious past known only as Zero to take up the mask, things will turn out deadlier than anyone could possibly have imagined…

Collecting SHADOWMAN (1997) #1–4, along with SHADOWMAN PRESENTS: DEADSIDE #1–3 and featuring never before seen sketches, designs and process art straight out of the Valiant vaults!