ShirtPunch Teams Up with Valiant for Exclusive ARCHER & ARMSTRONG Apparel – Available Only for 24 Hours!

ShirtPunch Teams Up with Valiant for Exclusive ARCHER & ARMSTRONG Apparel – Available Only for 24 Hours!

March 23, 2016
TaylorNetwork
no comment on ShirtPunch Teams Up with Valiant for Exclusive ARCHER & ARMSTRONG Apparel – Available Only for 24 Hours! 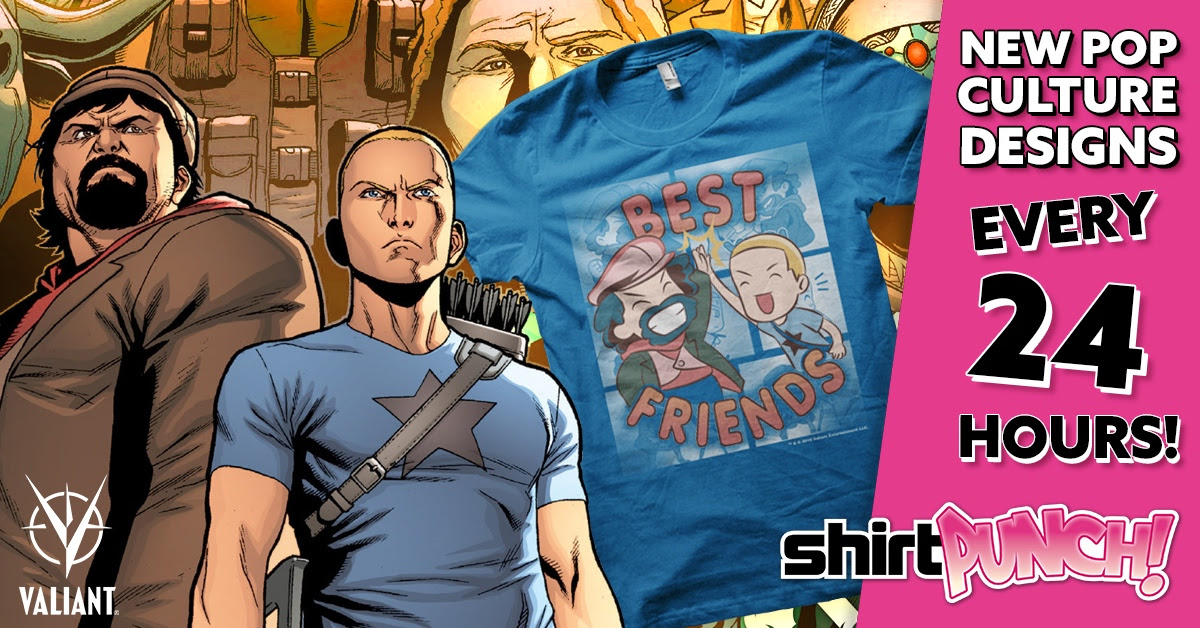 For 24 hours only, get the drop on Valiant’s award-winning(est) adventurers with a one-of-a-kind Archer & Armstrong apparel design on custom-made shirts, hoodies, and more!

Valiant Entertainment is proud to announce an all-new collaboration with ShirtPunch – your home for the best Pop Culture and Fandom T-shirts and toys in the world – for a limited edition, one-day-only run of Archer & Armstrong apparel sporting a never-before-seen, emoji-inspired “Best Friends” design!

Available only from Monday, March 21st at 12:00 a.m. ET. to Monday March 21st at 11:59 p.m. ET., – and never to be reproduced again – this is your only chance to hoard a bottomless satchel’s worth of long-sleeve and short sleeve shirts before they’re gone forever! Then, head to your local comic book retailer to pick up A&A: THE ADVENTURES OF ARCHER & ARMSTRONG #1 – the FIRST ISSUE of an ALL-NEW ONGOING SERIES from red-hot writer Rafer Roberts (Plastic Farm) and superstar artist David Lafuente (Ultimate Spider-Man)!

Smashing in a host of different sizes and styles, the Archer & Armstrong “Best Friends” apparel through ShirtPunch is available through the following items.

MEET ARCHER: A sheltered teenage martial arts master and expert marksman that was raised for a single purpose – to kill the devil incarnate. Little did he know that this undying evil was actually Armstrong (he’s actually a pretty good guy…once you get to know him) and, since hitting the road together, the two have become great friends and even better partners.

Valiant’s globe-trotting superhero adventurers may be best friends and even better partners…but they’ve never looked better than this! Don’t miss your shot to claim an exclusive trove of Archer & Armstrong “Best Friends” apparel from ShirtPunch – arriving on the heels of A&A: THE ADVENTURES OF ARCHER & ARMSTRONG #1‘s smash-hit debut!

Monday, March 21st is your one and only chance to snag these highly collectible shirts before they plunge back into Armstrong’s bottomless satchel forever — on sale today, only at ShirtPunch!