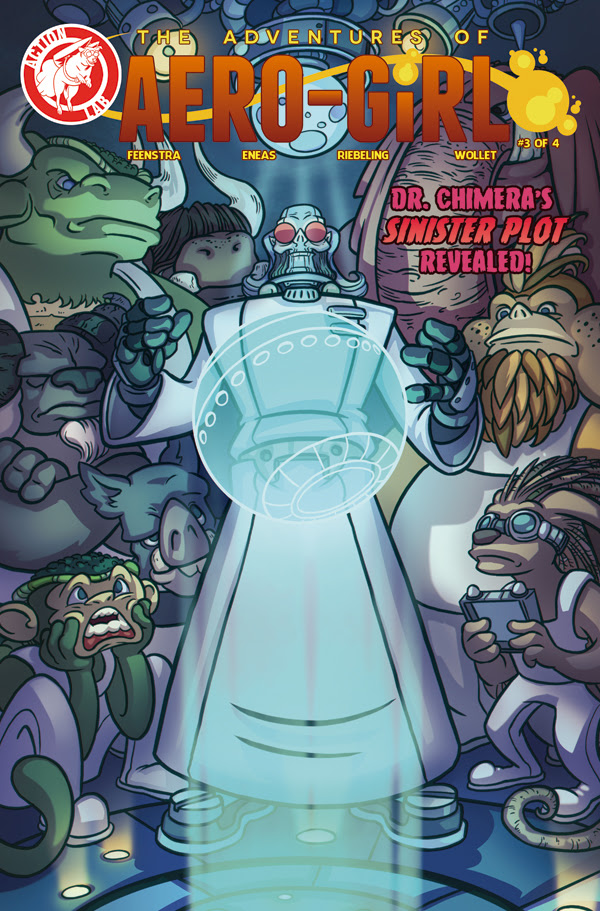 The Fantastic Fantoccini and his army of evil puppets attacks! The motivation behind Dr. Chimera’s most sinister plot to change Foxbay forever is revealed. Will Foxbay’s newest powered pair be ready to stop him? 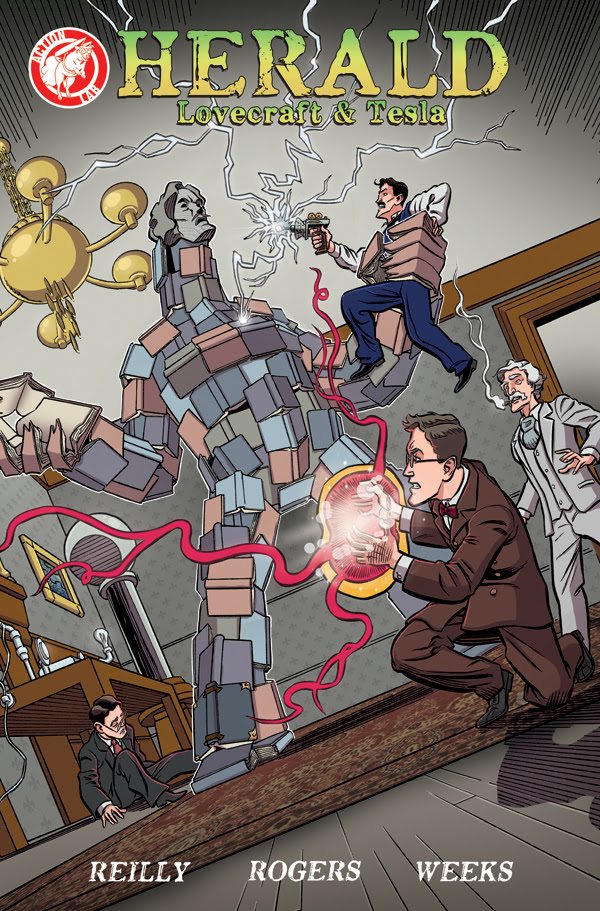 Mark Twain’s retirement party turns deadly when the book golem William Wilde arrives. Meanwhile, Harry Houdini and Susan Lovecraft learn more than they should when they infiltrate one of Aleister Crowley’s séances. 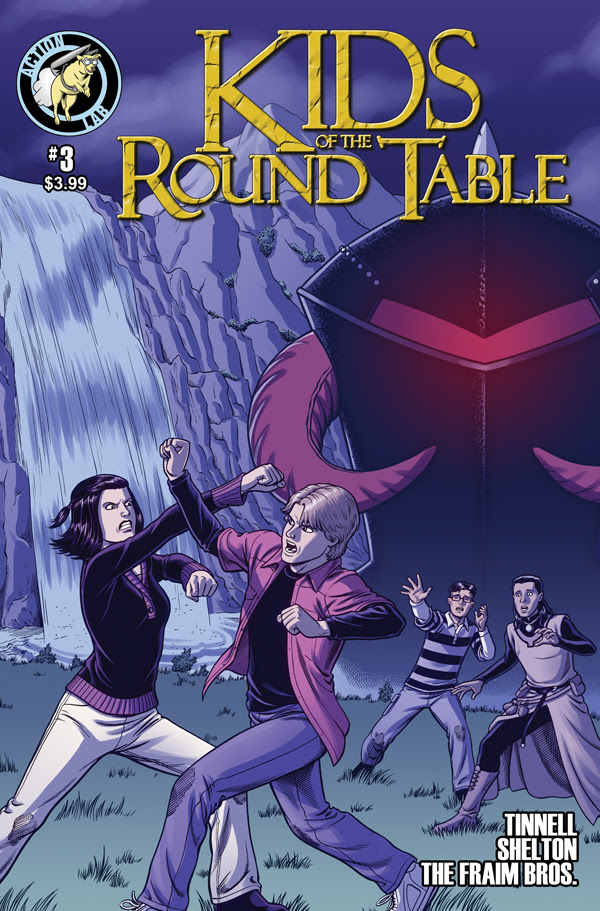 Kevin, Maggie, and Ben find themselves in a parallel world where the magic of Camelot still rules and agents of both Merlin and Morgan le Fay make their presence known.  Can these would-be successors to the Knights of the Round Table survive a supernatural attack? Aaron J. Shelton joins the KOTRT creative team as co-writer with this issue! 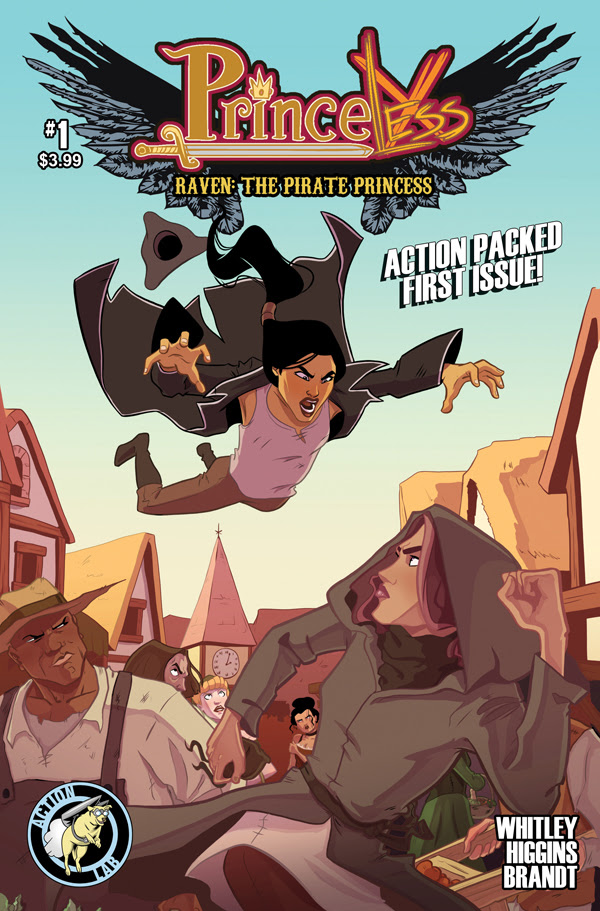 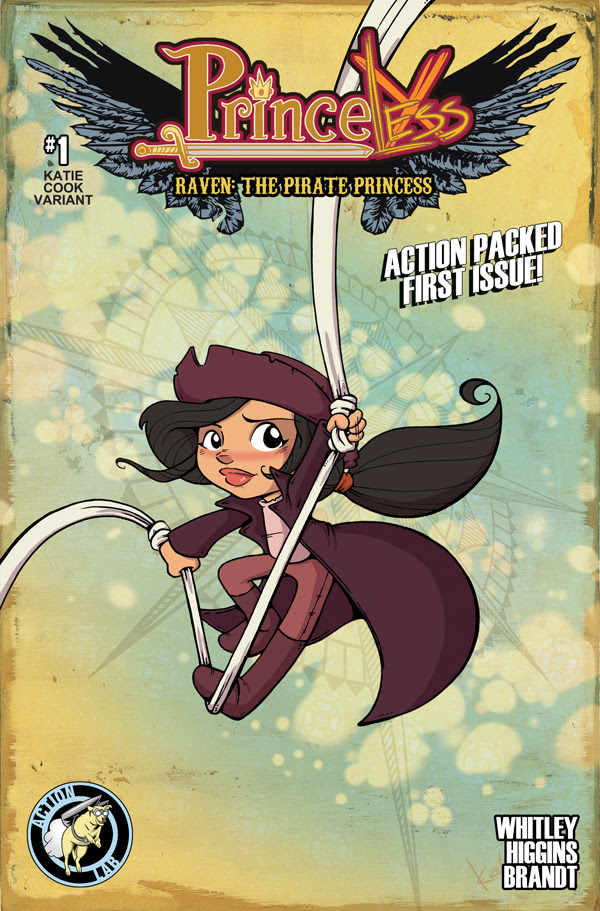 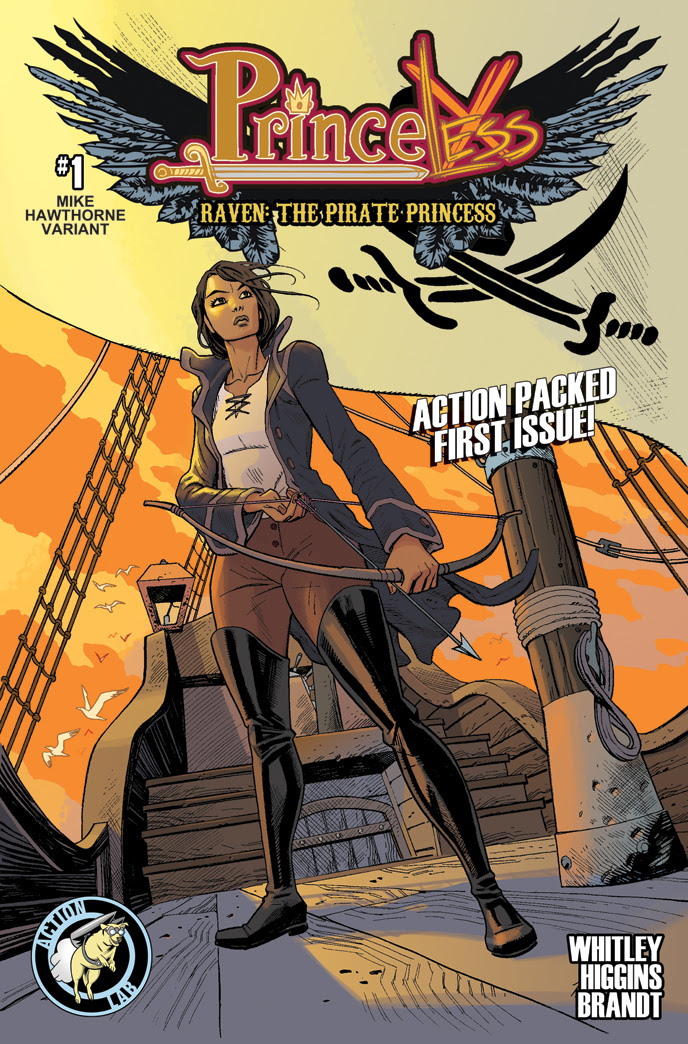 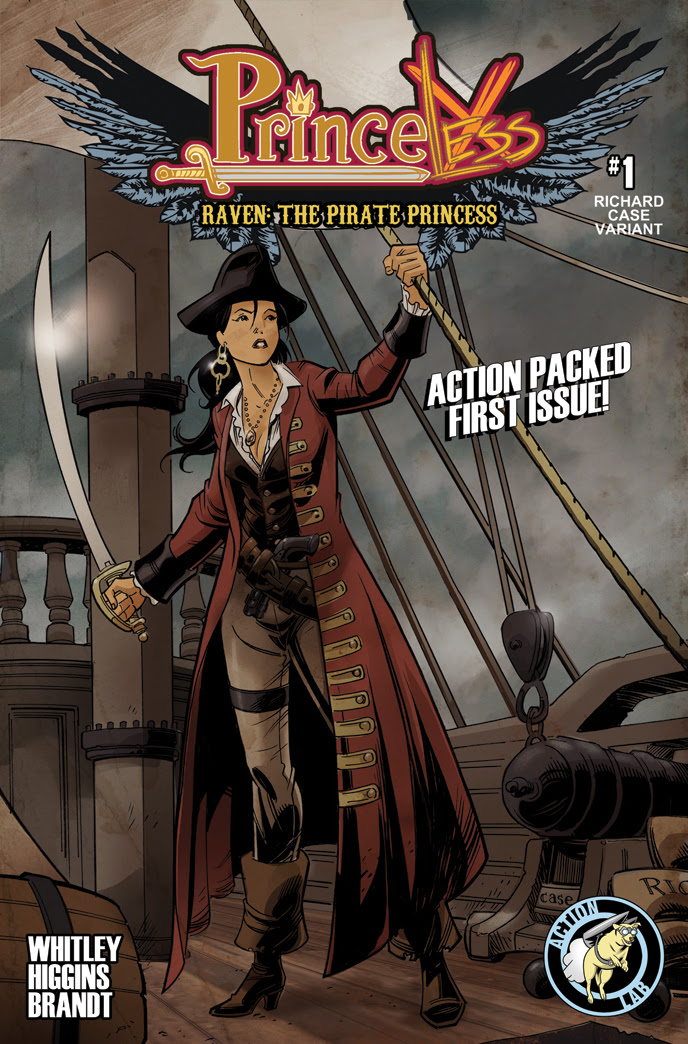 Spinning right out of the pages of Princeless, it’s the ongoing adventures of Raven Xingtao, The Pirate Princess.  Raven if ready to set off on a quest for revenge against her brothers who have stolen her inheritance.  The monthly ongoing series picks up right where Princeless Volume 3 left off and has the same creative team with Variant covers by Katie Cook, Mike Hawthorne, and Richard Case, limited to 2,000 copies each!
Crofts.
32 pgs./ All Ages/ FC                        $3.99/ $4.99 Variant 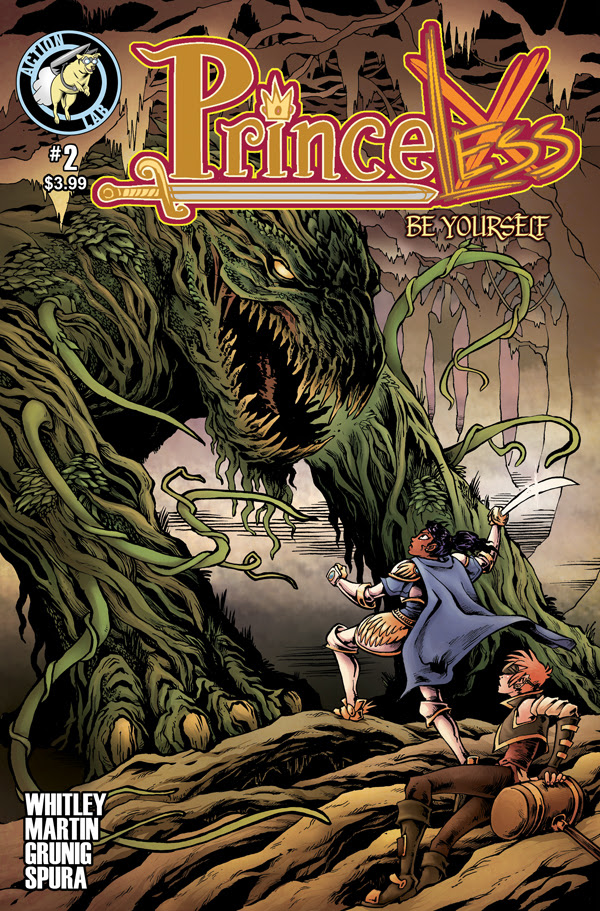 In their quest to save Adrienne’s sister Angoisse from the Grimmorium Swamp, Adrienne and Bedelia have been trapped and captured by the nefarious goblins.  What do the goblins want with them…and what happened to Sparky after they crashed in the swamp?  Plus, Adrienne’s brother Devin sets out on a quest of his own! 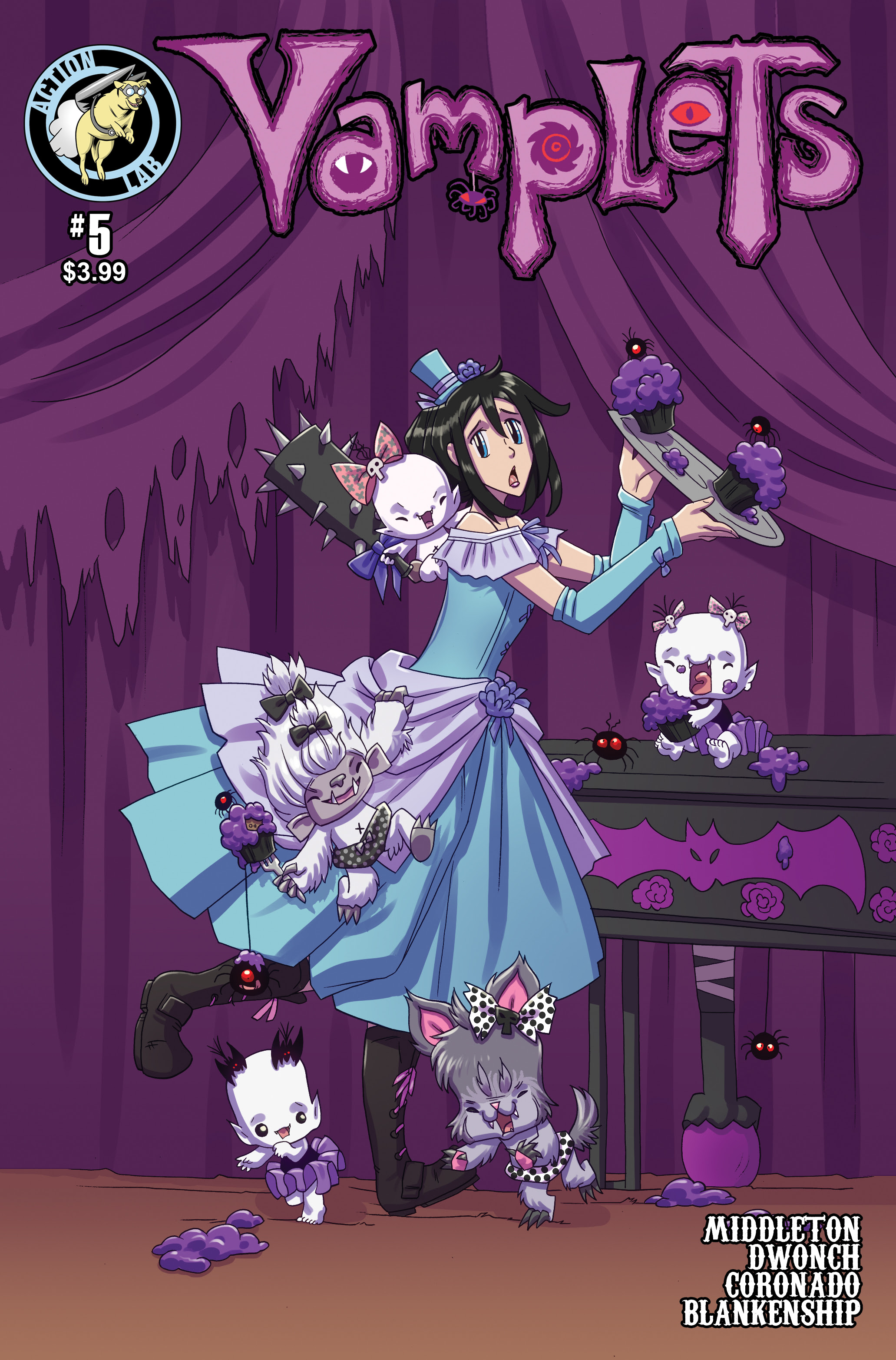 Destiny Harper is in deep trouble, and she will need the help of Rasket, Lycinda and mysterious Madame Simone  to thwart the plans of the evil Vammette! 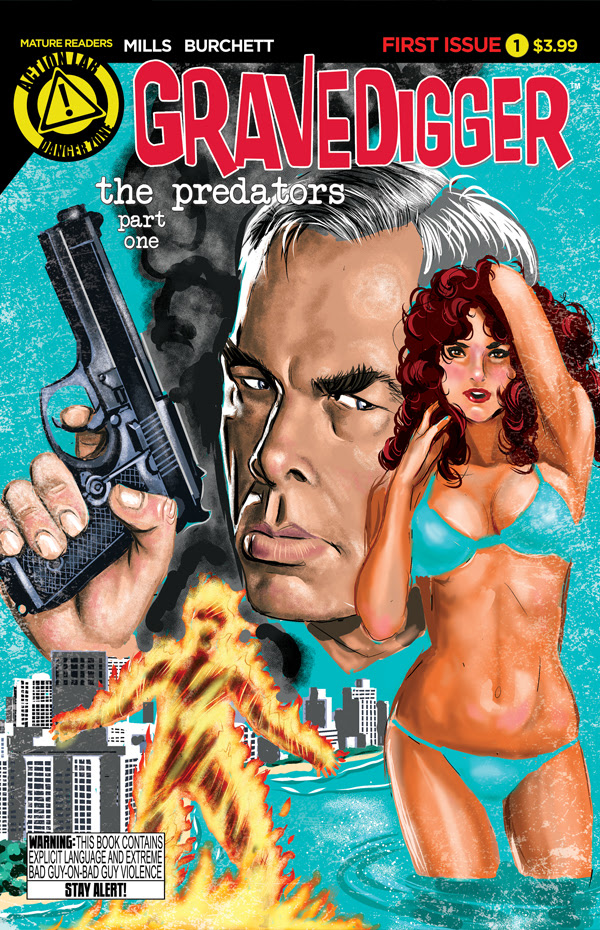 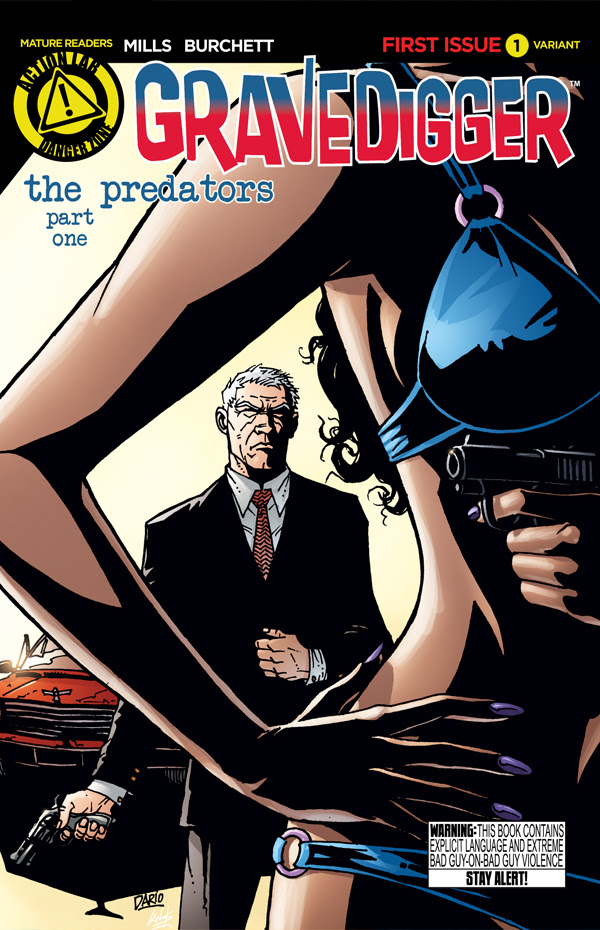 The popular noir web series returns to print! Framed for the murder of a mob boss’s daughter, “Gravedigger” McCrae is on the run in a South Florida paradise, pursued by a relentless crew of killers. His pursuers think tracking him down will be easy, but Digger McCrae is particularly dangerous prey. Gravedigger is a master class in hard-boiled comic action! 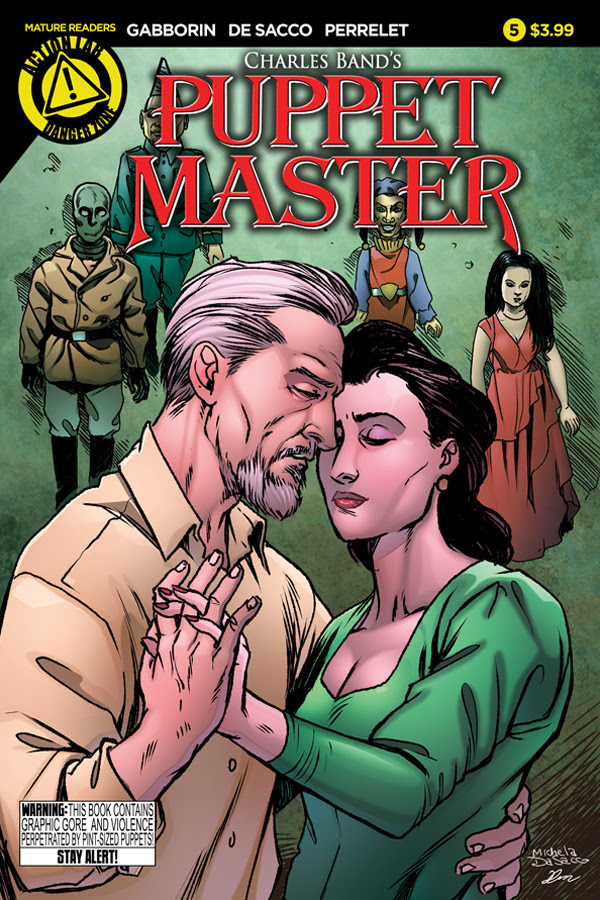 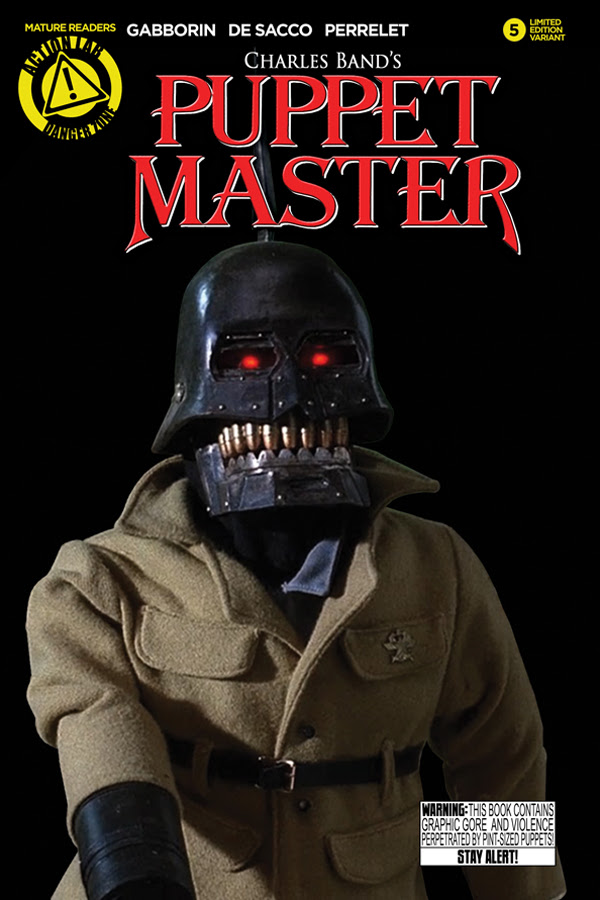 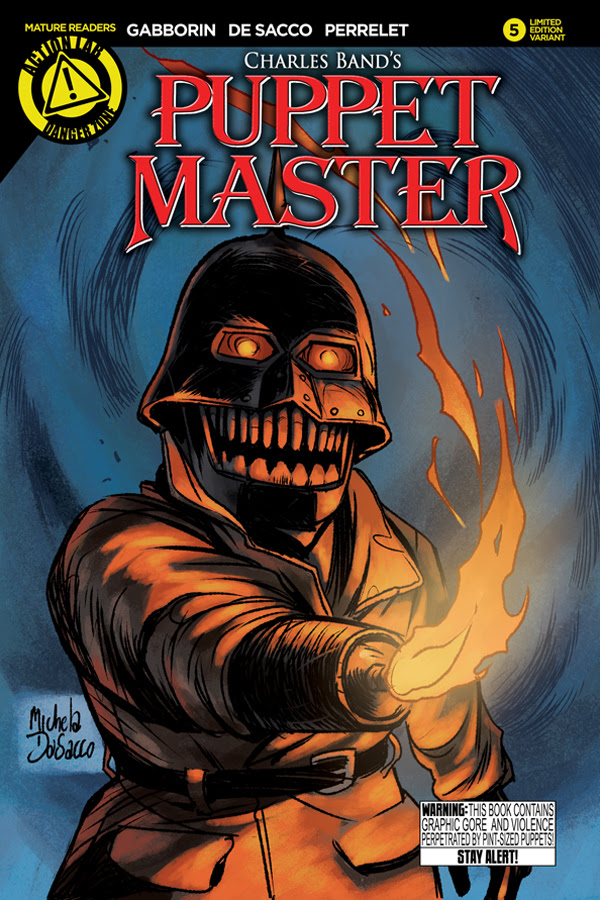 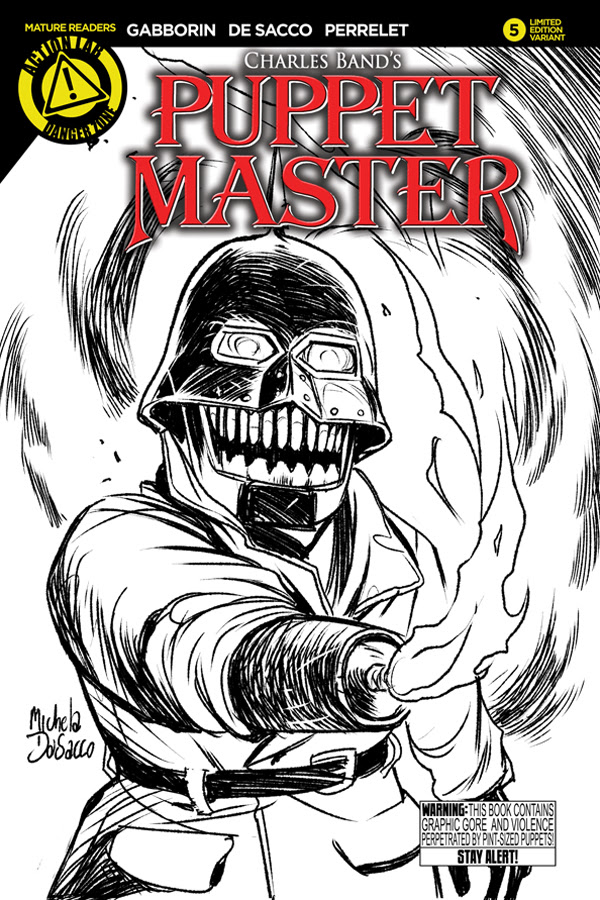 Breathing fresh air for the first time in decades, the souls once condemned to Toulon’s Puppets have been freed to live in flesh and blood bodies.  But if they are out of the Puppets… who’s in? “THE REBIRTH” continues to explore the world and mythos created in the cult classic Puppet Master film series!
Variant Covers: Color, Sketch, & Photo cover of Torch limited to 1500 copies each 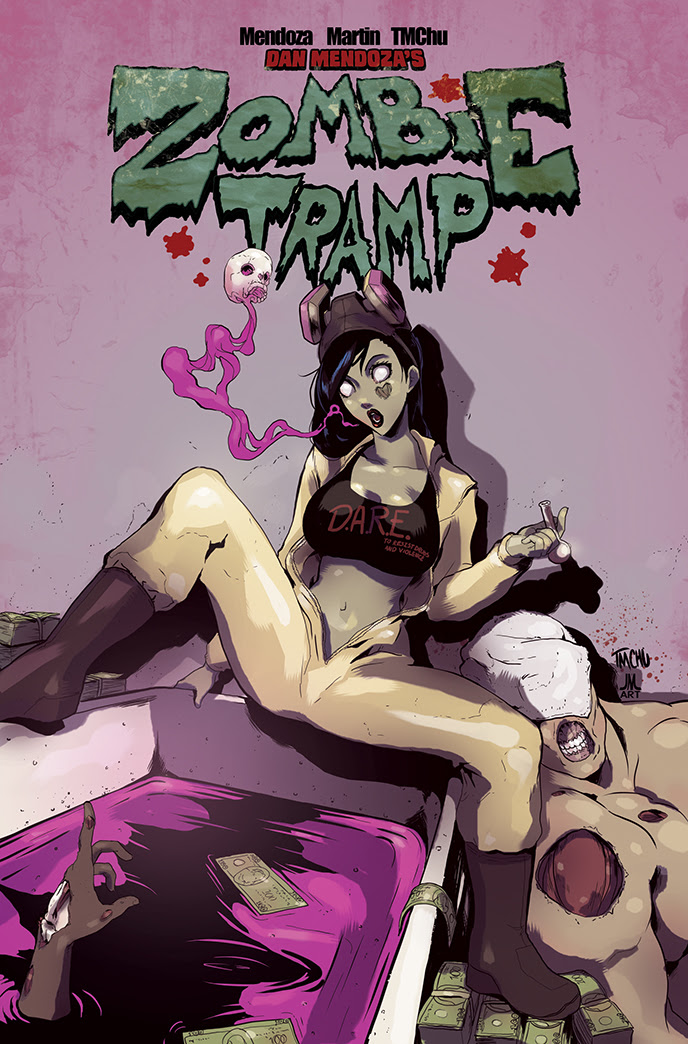 Perfect jumping on point for new readers! Janey is back, fresh from a dirt nap, and continuing her cross-country quest with a stop in the motor city. But when a bath in what appears to be an abandoned Detroit warehouse leaves rings in the tub, the meth chef resident cooks up a new drug… yep, it’s Breaking Bath Salts!! Plus an all-new major character makes her first appearance!!!
Collects the third story arc of the wildly popular ongoing series. 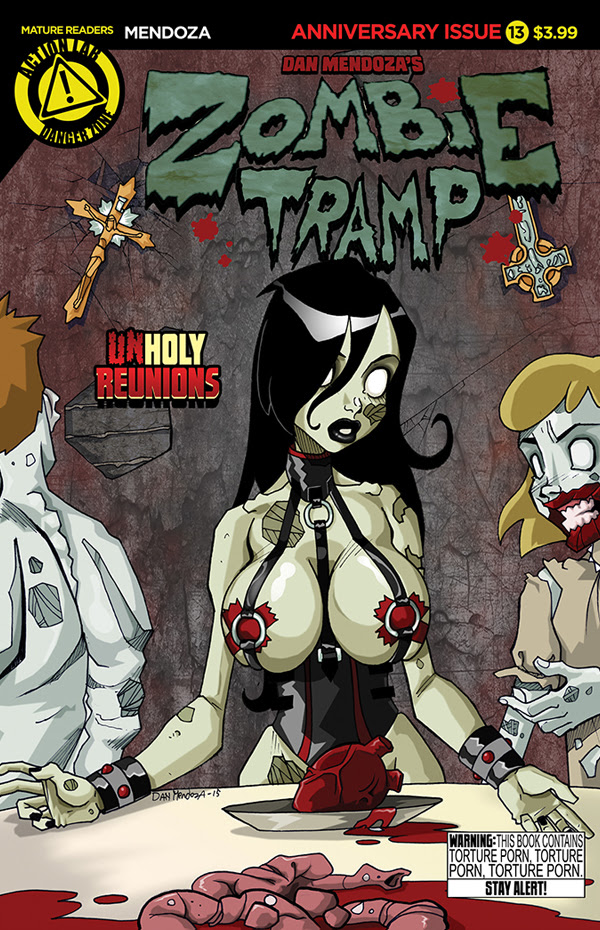 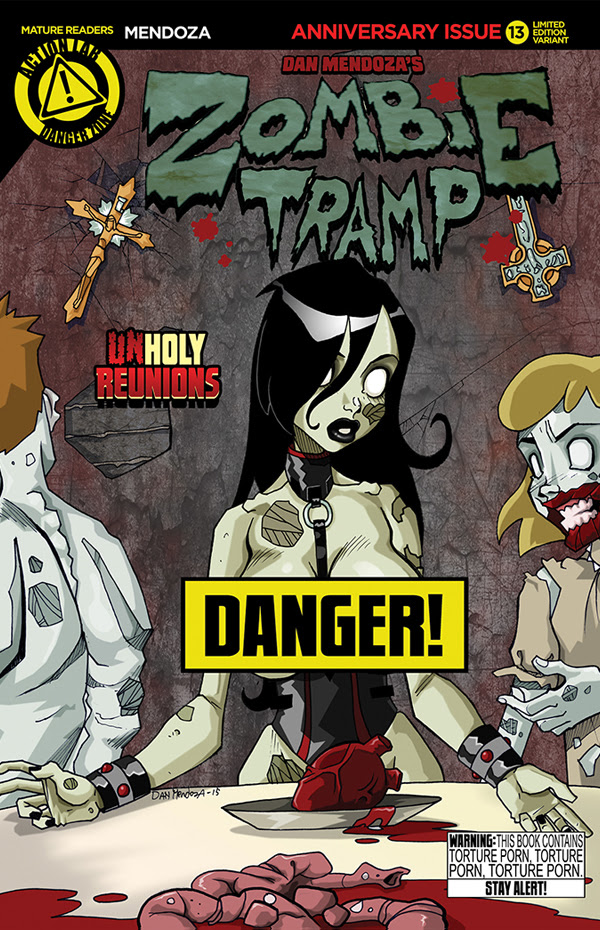 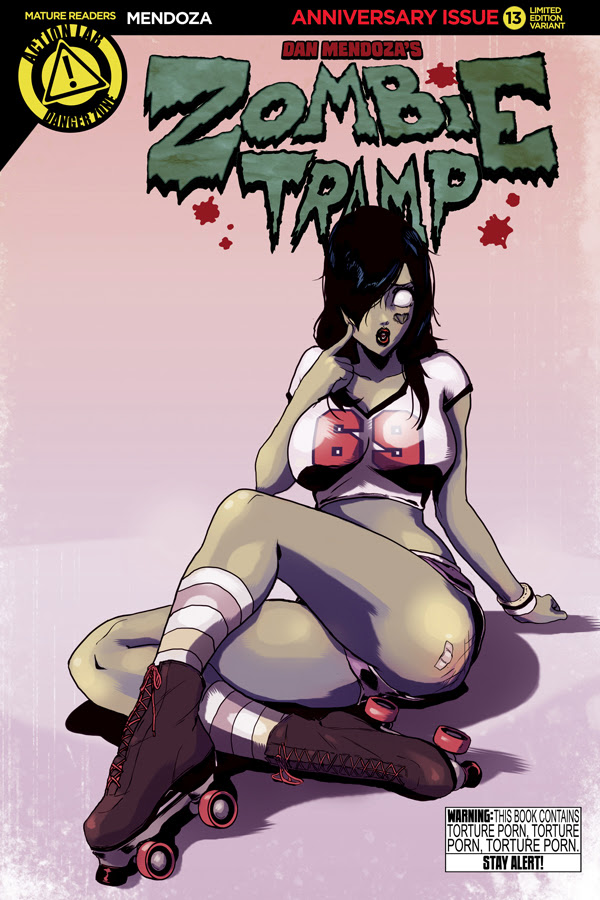 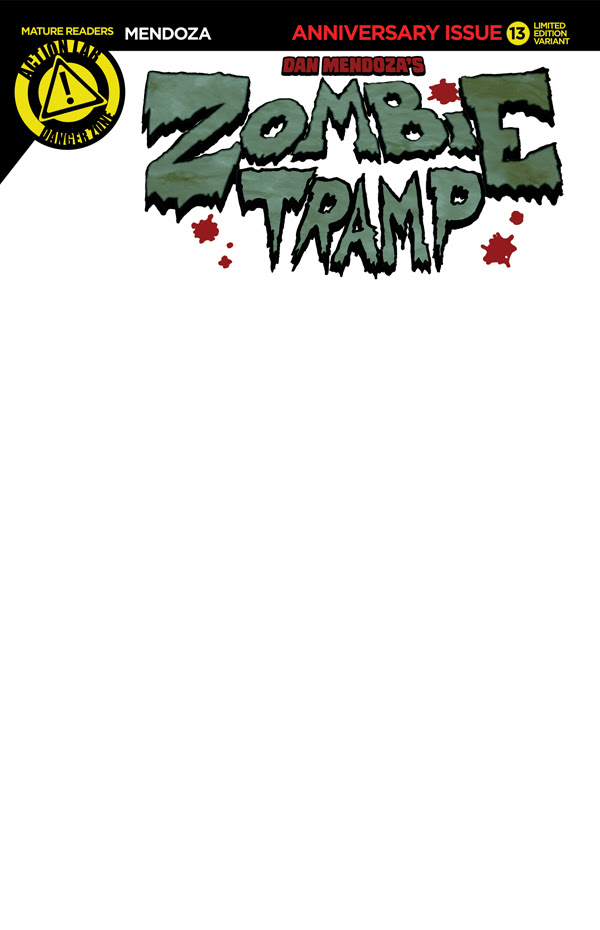 Special anniversary issue – Dan Mendoza returns for the one year anniversary of the ongoing series in a special issue written and drawn by the Zombie Tramp creator himself. As Janey makes her way to Florida for vengeance, she’s offered a chance at forgiveness to one of those that wronged her and set her on her twisted path. 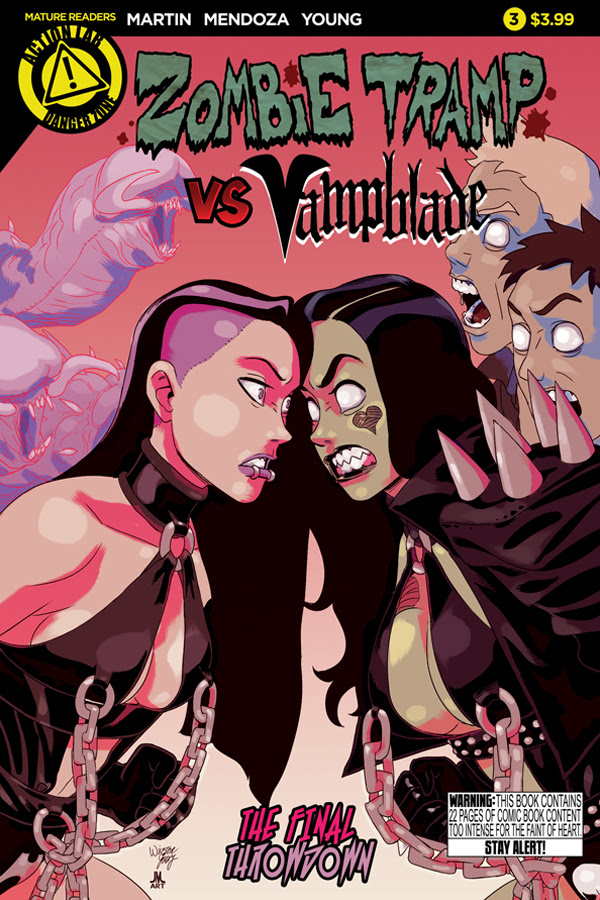 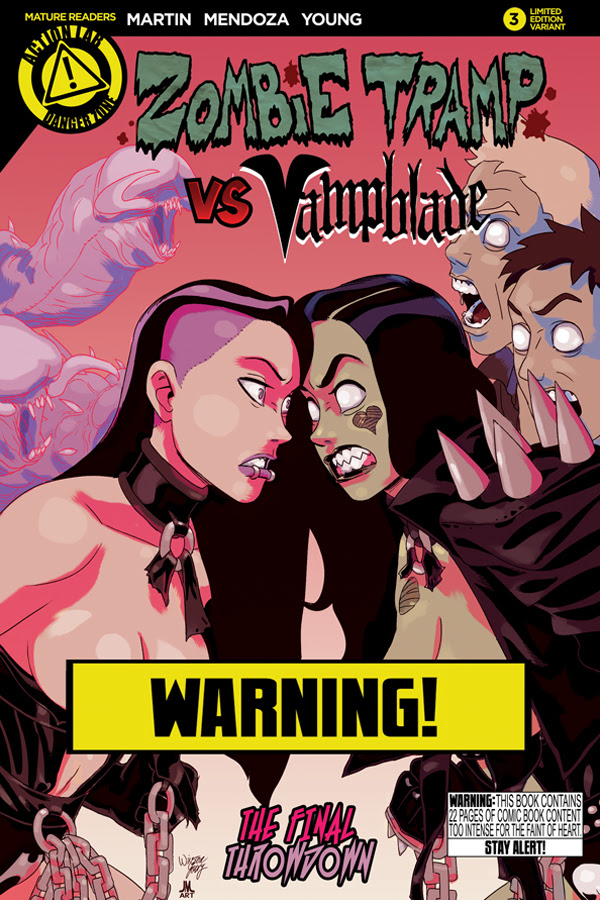 This is it, the 90s comic book bad girl brought to life and the supernaturally powered zombie queen go toe to toe one last time. With Zombie tramp mastering Vampblade’s mystical blade to help destroy her sworn enemies, the disgusting other dimensional parasites, the two must now conquer an even deadlier challenge… friendship?!?