BOOK OF DEATH #1 – Venditti, Gill and Braithwaite Reveal Valiant’s Future in the Blockbuster Event of 2015!

BOOK OF DEATH #1 – Venditti, Gill and Braithwaite Reveal Valiant’s Future in the Blockbuster Event of 2015!

April 9, 2015
TaylorNetwork
no comment on BOOK OF DEATH #1 – Venditti, Gill and Braithwaite Reveal Valiant’s Future in the Blockbuster Event of 2015!

So let it be written…

So let it be done…

This summer, witness the death of Ninjak…learn the final fate of Bloodshot…see the redemption of Toyo Harada…meet the next bearer of the X-O Manowar armor…herald the next generation of Valiant heroes…and witness the rise of villainous forces not yet known… We know it will be…because the Book of Geomancer tells us so! 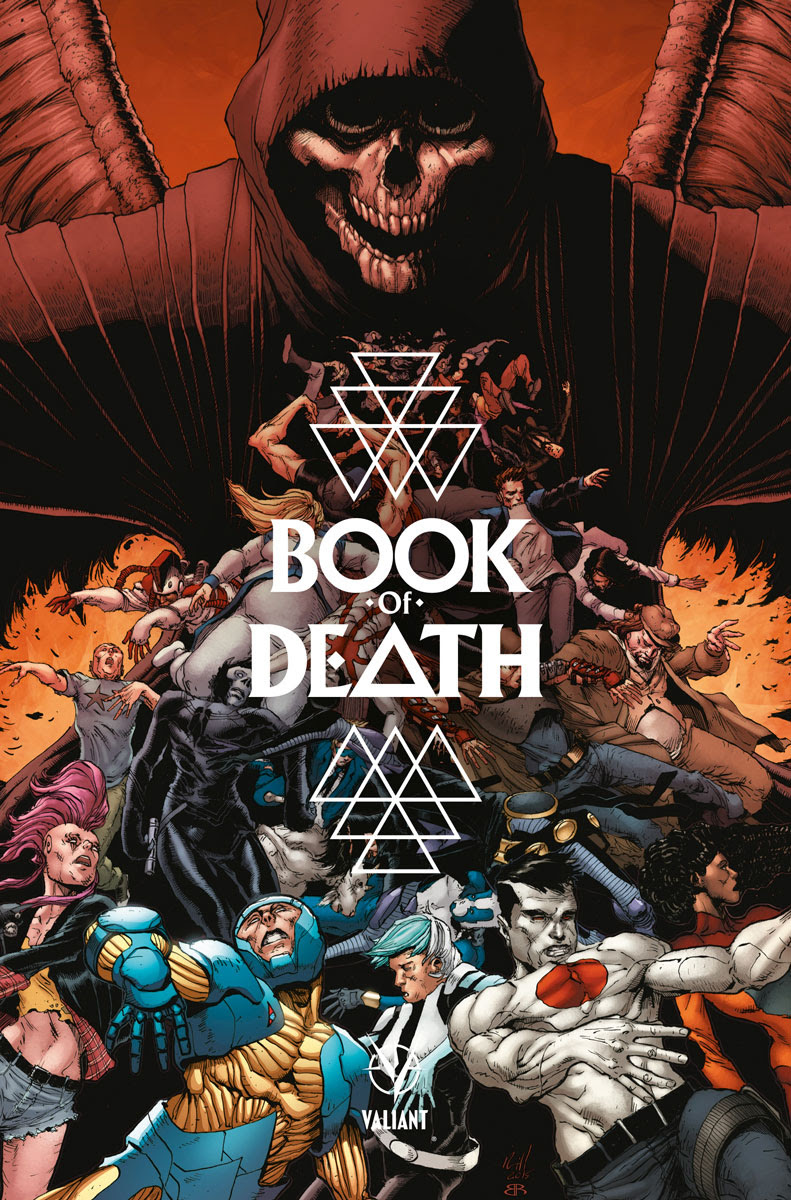 Valiant is proud to announce BOOK OF DEATH – the epic new Valiant event of 2015! Beginning with in July with BOOK OF DEATH #1 (of 4) from New York Times best-selling writer Robert Venditti (X-O MANOWAR, Green Lantern), superstar-in-the-making Robert Gill (ARMOR HUNTERS: HARBINGER,Batgirl) and visionary artist Doug Braithwaite (ARMOR HUNTERS, Justice), BOOK OF DEATHcontinues throughout the summer with four standalone one-shots from an all-star cast of Valiant’s top talents! Colliding the next two thousand years of history against the most powerful heroes of today, the summer’s must-read comics event starts here in July as a new Geomancer emerges to build a bridge to the future of the Valiant Universe!

Now we know. The Book of the Geomancer has recorded it all. But only a young girl – the last in a line of the enigmatic mystics who protect the Earth known as Geomancers – has seen this future come to pass, from the coming cataclysm to the dawn of the 41st century. Alone with her sworn protector, the Eternal Warrior – a soldier battle-forged across five thousand years of combat – the duo must defy their allies to stop the Dark Age that now threatens to eclipse our world.

Together, they are the number one target of every hero and villain on Earth. Either the Eternal Warrior hands her over…or they take him down. But can even he single-handedly protect one child when the entire Valiant Universe wages war against him?

“In the tradition of Valiant’s original RAI #0, BOOK OF DEATH is going to reveal glimpses of the future of the Valiant Universe and, with it, many of the monumental events and occurrences that our heroes will face,” said Valiant CEO & Chief Creative Officer Dinesh Shamdasani. “Major characters will die, while others will be introduced for the very first time. The loves, the losses, and the betrayals that await our biggest characters…it all starts here. For the Geomancer, this future has already happened and, in each issue, we will see more of the events that shaped her life revealed. BOOK OF DEATH will have an immediate impact on not only the stories that follow it in 2015, but on the next decade of the Valiant Universe as well.”

Also coming in July, the future of the Valiant Universe continues with four visionary tales of present and future torn directly from the pages of the Book of the Geomancer! Each month, join an all-star cast of creators – Jeff Lemire (THE VALIANT, BLOODSHOT REBORN) & Doug Braithwaite (UNITY, IMPERIUM), Matt Kindt (NINJAK, RAI) & Trevor Hairsine (DIVINITY), Joshua Dysart (HARBINGER, IMPERIUM) & Kano (THE DELINQUENTS), and Robert Venditti (X-O MANOWAR, ARMOR HUNTERS) & Clayton Henry (HARBINGER WARS, IVAR, TIMEWALKER) – as they come aboard the summer’s monumental comics event to chronicle the ultimate fate of Valiant’s biggest heroes! From the modern day to the far future, the destinies of Bloodshot, Ninjak, the Harbinger Renegades, X-O Manowar, and more will stand revealed in four essential, standalone chapters at the epicenter of BOOK OF DEATH:

BOOK OF DEATH: THE FALL OF BLOODSHOT #1
Written by Jeff Lemire; Art by Doug Braithwaite
ON SALE IN JULY

BOOK OF DEATH: THE FALL OF NINJAK #1
Written by Matt Kindt; Art by Trevor Hairsine
ON SALE IN AUGUST

BOOK OF DEATH: THE FALL OF HARBINGER #1
Written by Joshua Dysart; Art by Kano
ON SALE IN SEPTEMBER

BOOK OF DEATH: THE FALL OF X-O MANOWAR #1
Written by Robert Venditti; Art by Clayton Henry
ON SALE IN OCTOBER

“In just a short time, I think Valiant has built a reputation for creating some of the most well-received comic book events in the industry today. HARBINGER WARS… UNITY… ARMOR HUNTERS… THE VALIANT… These are all stories have been huge hits with fans, retailers and critics alike, but BOOK OF DEATH might just be the biggest, most game-changing event we’ve attempted to date,” said Valiant Editor-in-Chief Warren Simons. “Much of the conversation at the Valiant creative retreats helped formalize the ideas behind BOOK OF DEATH and hammer out the colossal impact that the Eternal Warrior and new Geomancer will soon have on the landscape of the Valiant Universe. BOOK OF DEATH will be the ultimate peek at the future of the Valiant Universe and it’s only fitting that we bring as many major Valiant creators into the mix as possible.”

“BOOK OF DEATH is a story that’s been in the works for a long time, and I’m looking forward to showing readers what we have in store for them,” said writer Robert Venditti. “Last summer’s ARMOR HUNTERS event was so much fun to write, and, while this story will have a much different focus and tone, our goal is to deliver the same level of action, character, and universe building. The Eternal Warrior and the Geomancer are such great high concepts to work with. We’re going to reveal exactly what it means to be the Fist and Steel of Earth and provide an epic showcase for not only the Eternal Warrior, but all of Valiant’s heroes present and future.” 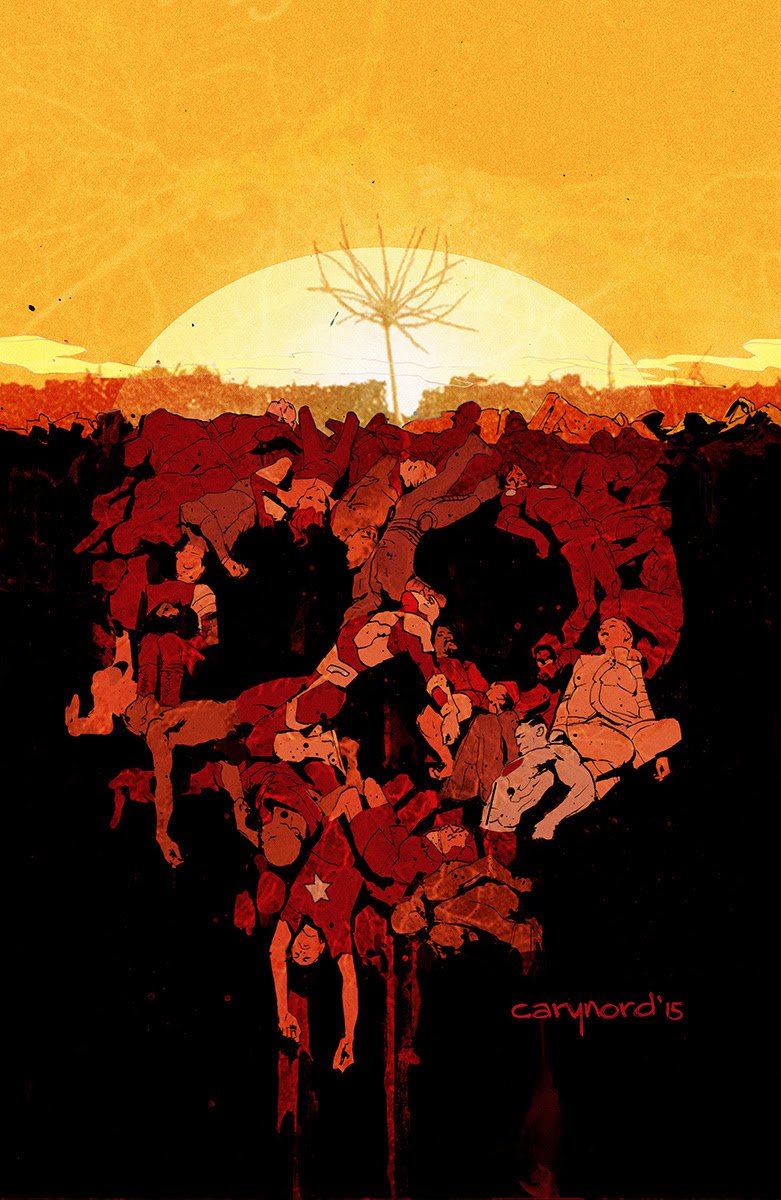 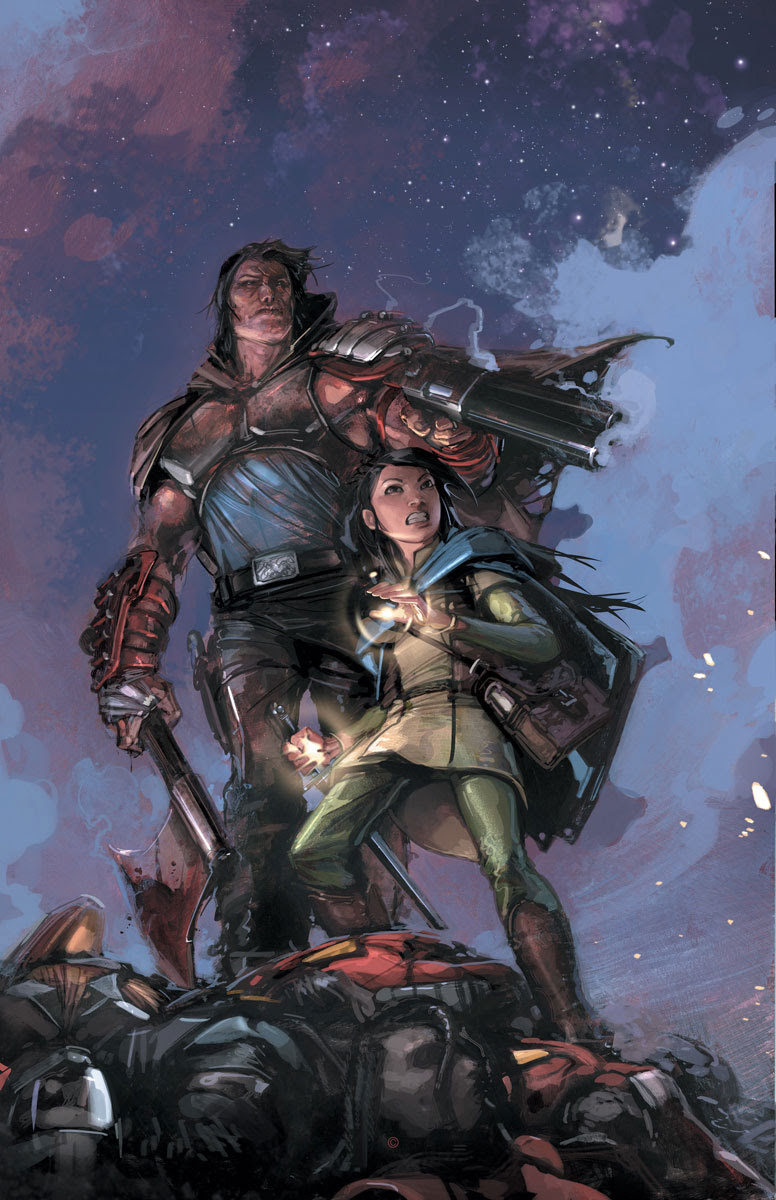 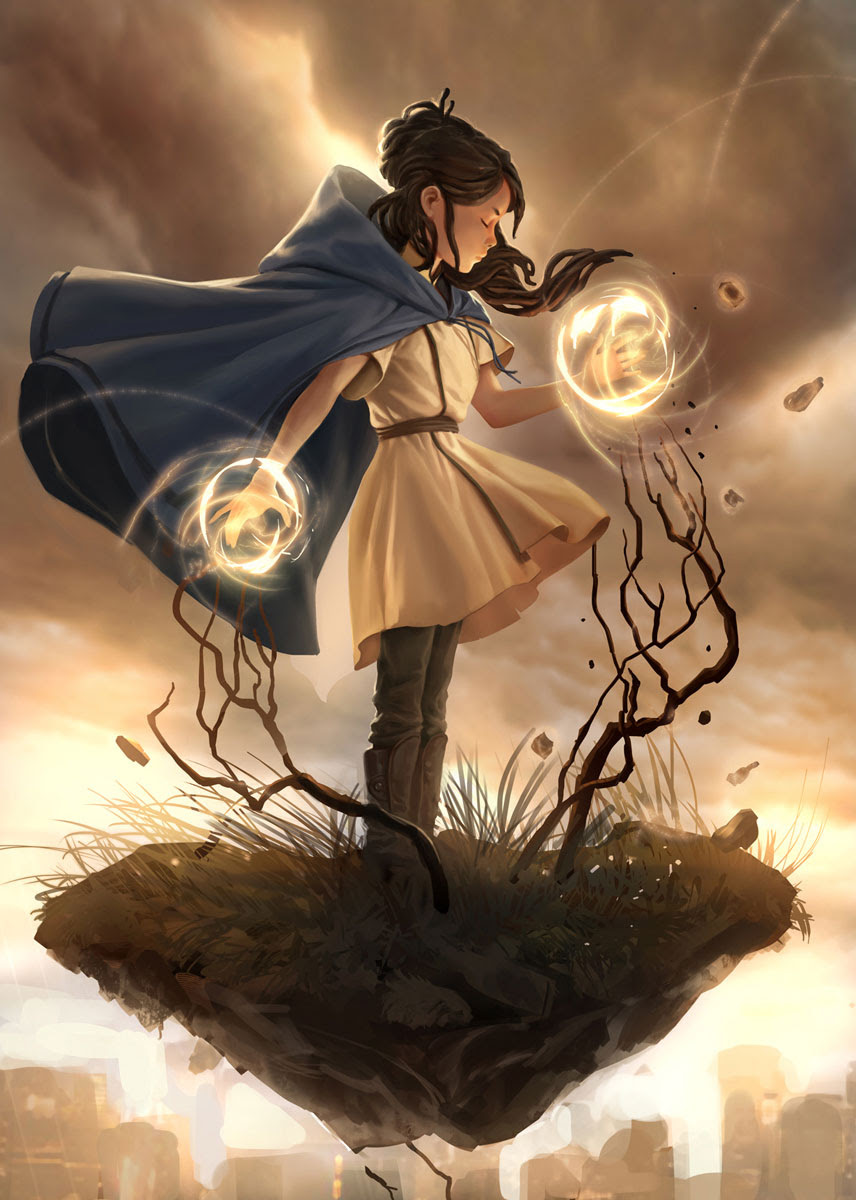 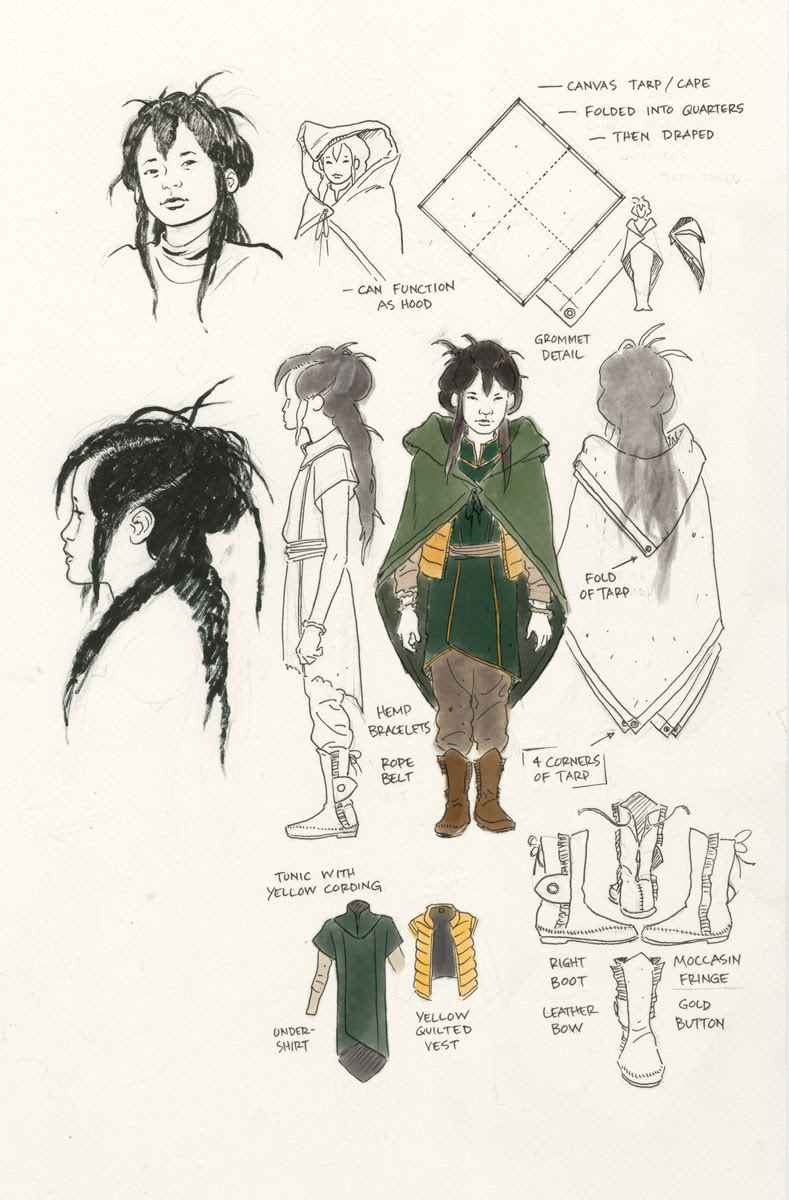 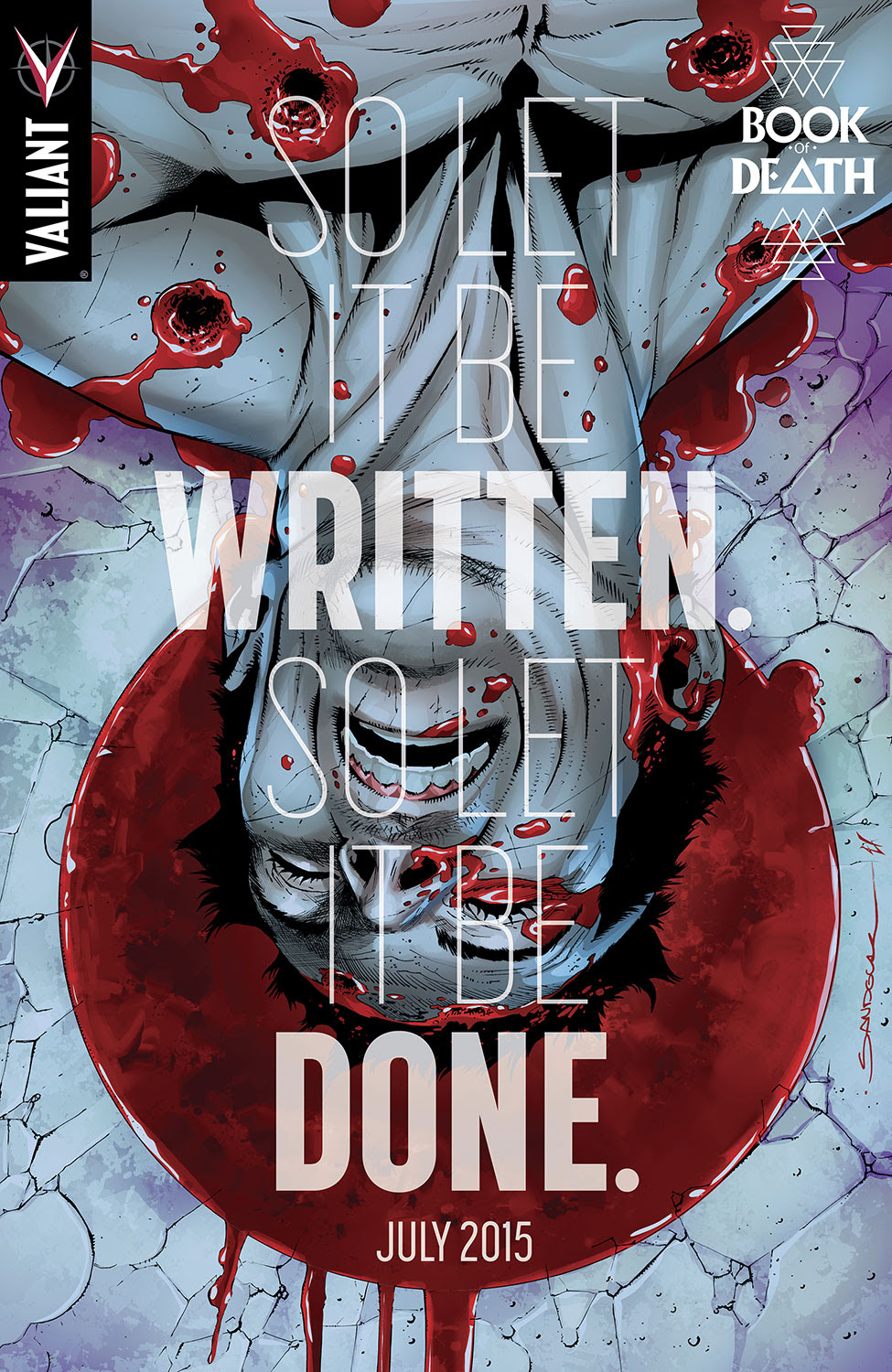 BOOK OF DEATH: THE FALL OF BLOODSHOT #1 – Teaser Image by Rafa Sandoval 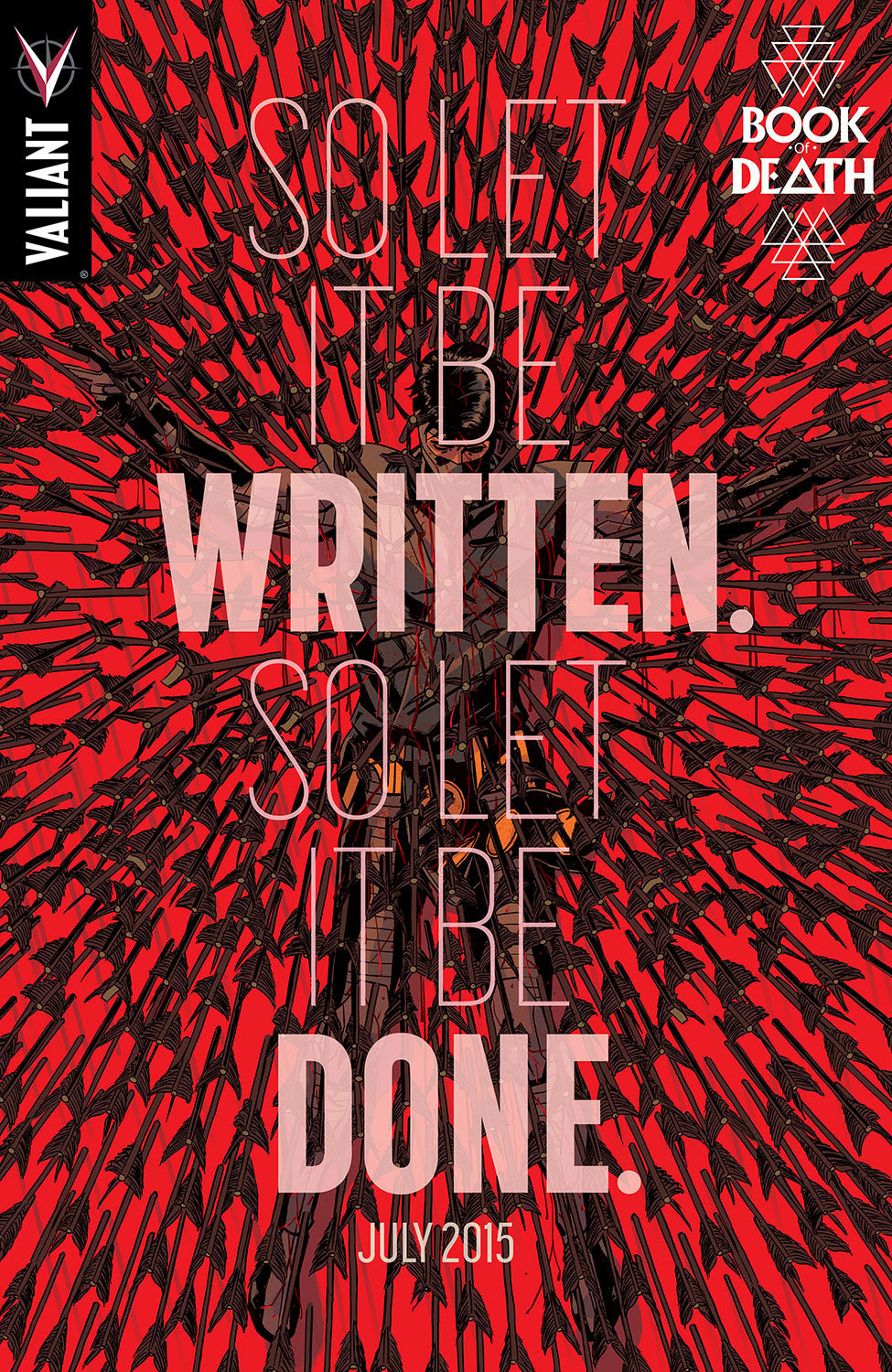 BOOK OF DEATH: THE FALL OF NINJAK #1 – Teaser Image by Kano 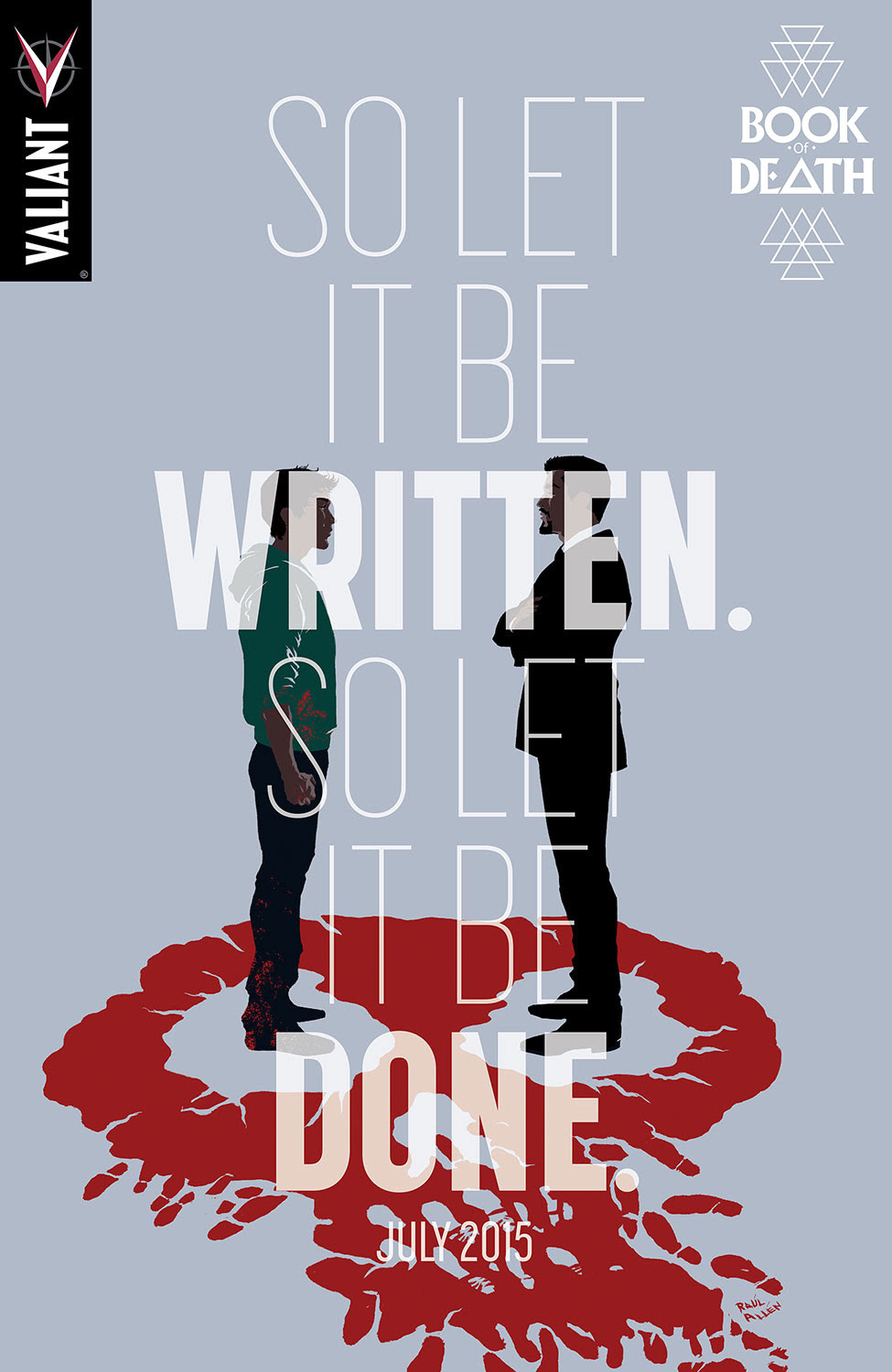 BOOK OF DEATH: THE FALL OF HARBINGER #1 – Teaser Image by Raul Allen 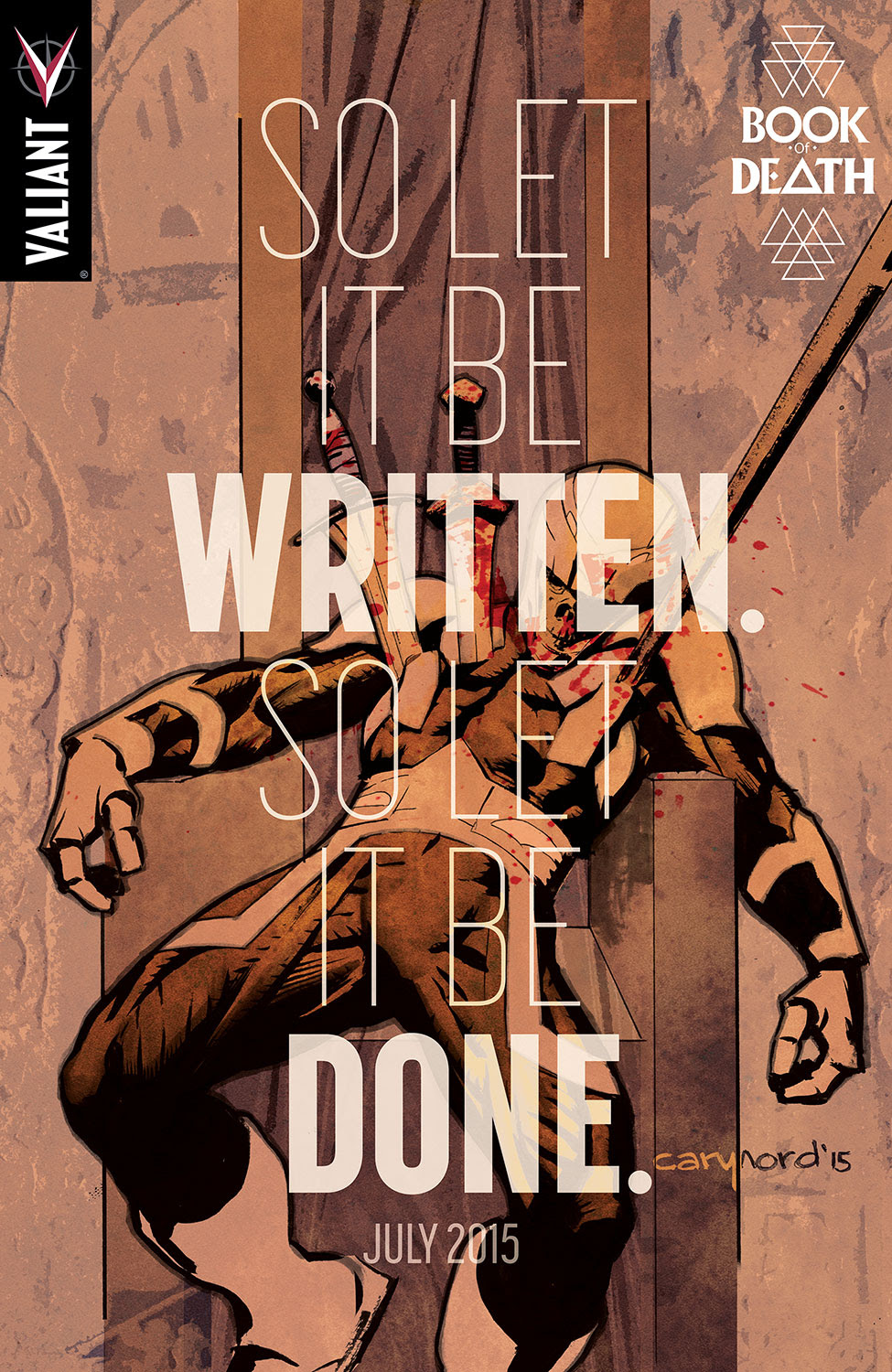 BOOK OF DEATH: THE FALL OF X-O MANOWAR #1 – Teaser Image by Cary Nord 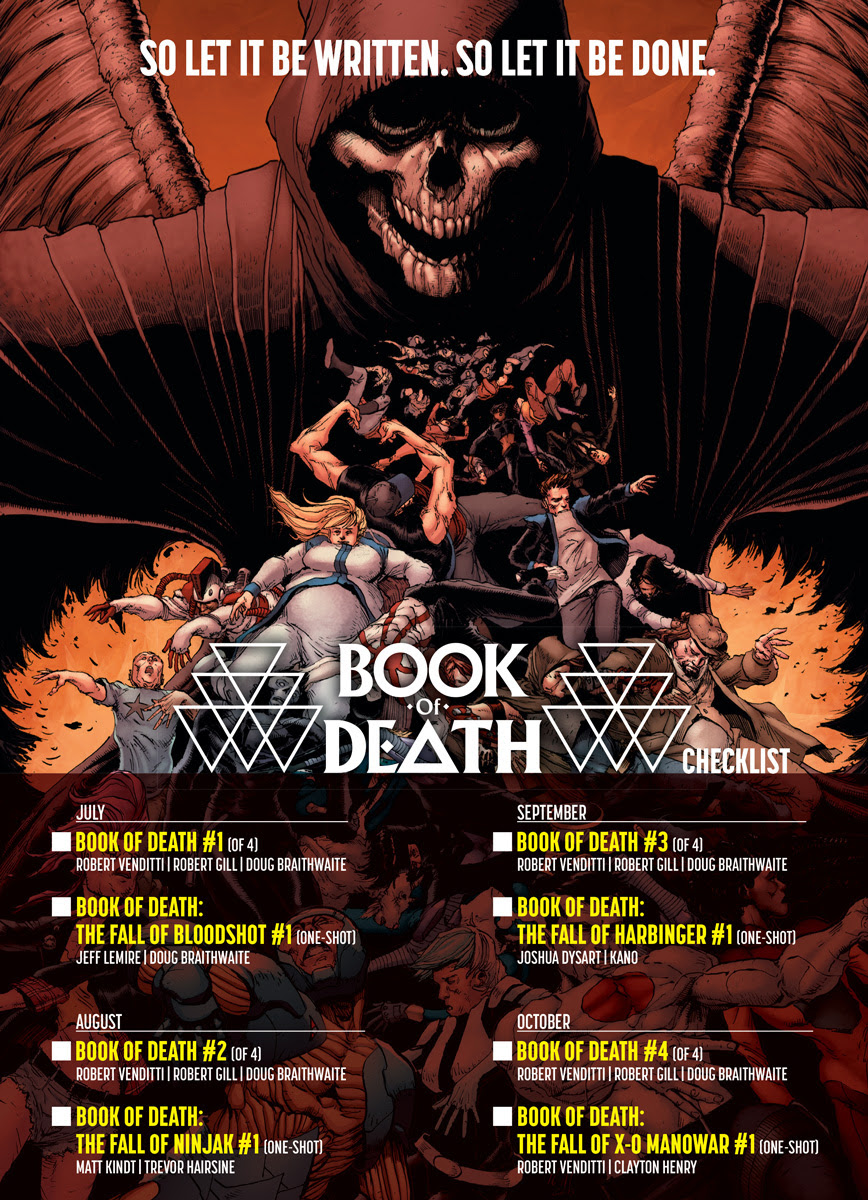 Like Loading...
Previous article
“SHIELD” POSTER FOCUSING ON MELINDA MAY
Next article
OFFICIAL AVENGERS: AGE OF ULTRON FEATURING THE VISION