The man once known as the unstoppable killing machine called BLOODSHOT must track down the impostors carrying out mass shootings in his former name. But the hunter becomes the hunted when an upstart FBI investigator and her grizzled partner believe the original Bloodshot himself to be responsible for the murders. Can Bloodshot elude the agents – and his own inner demons – long enough to take out a nanite-infused gunman?

There is a secret black market in New York. It is hidden in plain sight – in our streets, trains, restaurants. Those who know how to navigate it exchange secrets of extraordinary nature. But when the secret in circulation is a biological weapon derived from Vine technology, the gloves are off – and the most extraordinary agents are released to stop the disaster before it occurs. Otherwise, in less than thirty minutes, there will be no world to come back to. X-O Manowar, Archer, Neville Alcott, Detective Cejudo and Betamax are ready to save the world.

He may wield the universe’s most powerful weapon, but not even X-O Manowar is enough to combat the unstoppable doomsday protocol called Dead Hand. To defeat this mighty army, Aric will need some might of his own…and an unlikely ally might be the key to victory! Robert Venditti (ARMOR HUNTERS,The Flash) and Diego Bernard (Red Lanterns) continue the modern epic DEAD HAND!

Dr. Neela Sethi, the inventor of time travel is captured by her evil future-self (because…time travel) and tempted to give into her rage and become the woman who may destroy history! As the BIG CRUNCH rapidly unmakes the universe around her, Neela faces a choice that may give her her life’s dreams…at the cost of the very universe itself. But take heart, inhabitants of the very universe itself, because all of our hopes lie the hands of IVAR, TIMEWALKER! But even he can’t save us alone – what happens when history’s most jaded time traveler puts together the best team he can find to save time itself? A combination of his estranged family, like his immortal brothers ARMSTRONG and THE ETERNAL WARRIOR, his inter-dimensional enemies like history’s most re-tweeted prankster THE LURKER, and a BLOODSHOT NANITE with one heck of an attitude problem are just the start of history’s most unexpected saviors. The plot to save history begins here, so don’t worry! …Well, maybe you should worry a little.

Ninjak’s to-do-list for May:
1. Subvert the largest most dangerous weapons dealer in the world. 2. Focus on not letting your tortured childhood distract you. 3. Push your memories of loss so far down that you forget how to feel. 4. Betray everyone you know. 5. Don’t get killed. (Repeat as necessary)

Your to-do-list for May:
1. Drop everything & pick up Ninjak #3 by acclaimed team of Matt Kindt (RAI, Mind  MGMT), Clay Mann (X-Men), and Butch Guice (Captain America)! (Repeat as necessary)

Toyo Harada is assembling a legion of living weapons. And the last, greatest gambit he needs is deep within the clutches of his most powerful opponents. To secure the human asset critical to his plan, Harada gambles everything he has in an all-out battle to win everything he desires!

This is it! The mind-bending, reality-altering reveal of what happened to turn a long-lost Russian cosmonaut into the godlike being known as DIVINITY!

But there are some things even gods can’t do – a lesson that DIVINITY may not learn easily. Can the super-powered heroes of the world contain the rage of a mad god? The earth-shattering conclusion to Matt Kindt and Trevor Hairsine’s sci-fi epic will have long-term ramifications for the entire Valiant Universe!

The truth is declassified!

Discover what top-secret mission very nearly broke Unity and brought its heroes to the brink…and beyond. And has Major Palmer, the veteran field commander of H.A.R.D. Corps, come to lead Unity to a new day…or infiltrate it and bring it down?

The epic origins! The fearless first adventures! The ever-shifting allies and allegiances! In honor of Valiant’s 25th anniversary, get everything you need to know about the most formidable heroes and villains that the Valiant Universe has to offer right here with an all-new 40-page handbook for just $2.99!

From Animalia to Zephyr, get an essential briefing on Valiant’s most important players with a highly detailed and thoroughly updated breakdown of the monumental characters that will be making the Valiant Universe tick in 2015 and beyond! Featuring artwork from an all-star cast of Valiant superstars – Doug Braithwaite, Clayton Crain, Trevor Hairsine Clayton Henry, Bryan Hitch, Cary Nord, and many, many more – discover everything you need to know to jump into the world of Valiant’s award-winning series right here! Plus: start at the beginning and find out what you might have missed with a brand new guide to Valiant’s trade paperback collections! It all starts here in the VALIANT UNIVERSE HANDBOOK! 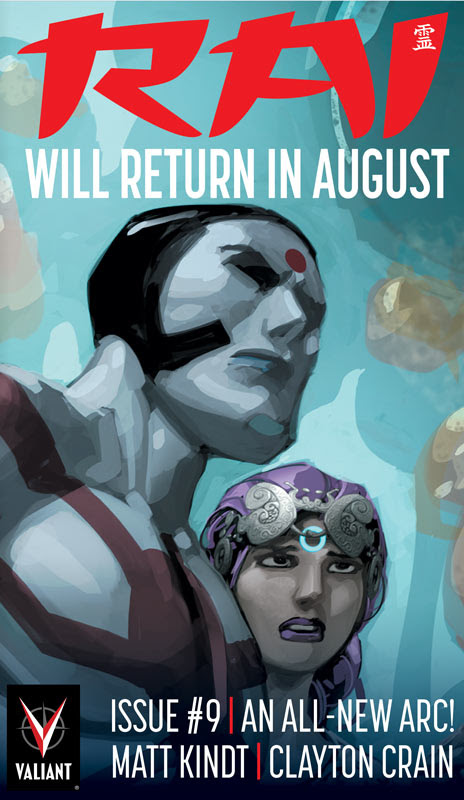 A battle ten millennia in the making is about to begin…

The Eternal Warrior has protected the Earth for more than 10,000 years. A master of countless weapons and long forgotten martial arts, he is guided by the Geomancers — those who speak for the Earth. During his long watch, the Eternal Warrior has failed three times. Each time, the Geomancer was killed…and a new dark age for humanity began. Each time, he was unable to stop The Immortal Enemy – a monstrous force of nature. A civilization killer. A horror that appears differently each time it arrives…and whose seemingly only purpose is to bring disorder and darkness to the world. Now, the time has come for The Immortal Enemy to return once more. But, this time, the Eternal Warrior will be ready. This time, he has a force greater than any single warrior. This time, he has…THE VALIANT.

Presenting the complete sold-out epic from New York Times best-selling writers Jeff Lemire (BLOODSHOT REBORN, Green Arrow) & Matt Kindt (RAI, Mind MGMT) and Eisner Award-winning artist Paolo Rivera (Daredevil), discover why Valiant is one of the most critically acclaimed publishers in comics today with an all-star introduction to Bloodshot, the Eternal Warrior, Geomancer, and a visionary cast of heroes and villains from across the Valiant Universe – all for the low introductory price of $9.99.

From the dawn of the dinosaurs…to the Battle of Trafalgar…to the end of time itself…the first century-spanning adventure of IVAR, TIMEWALKER starts here!

At this very moment in Geneva, Switzerland, history is being made. A thousand meters underground inside the Large Hadron Collider, researcher Neela Sethi is about to discover time travel – and jeopardize her life in the process. But she doesn’t know that yet. Ten minutes from now, every deadbeat chrononaut, wannabe conqueror, and misguided protector of the timestream will be banging down her door. Good thing that the legendary Ivar, Timewalker, got there first… right? Now it’s down to history’s most jaded, most tempestuous time traveler to stop the worst of everything that is, was, and will be… before time runs out!

At last – the essential origins and early adventures of Valiant’s most powerful heroes and allies, collected between two covers for the first time anywhere!

Celebrate 25 years of the largest independent superhero universe in comics with these all-star explorations of Valiant’s indelible comics book icons, including X-O MANOWAR, HARBINGER, BLOODSHOT, ARCHER & ARMSTRONG, SHADOWMAN, and many more! Who they are, how they came to be, and what they fear the most… This is your essential one-stop guide to the biggest heroes, villains, and super-teams that the Valiant Universe has to offer, just in time for Valiant’s 25th anniversary celebration!

From the mind of New York Times best-selling writer Joshua Dysart (IMPERIUM, Unknown Soldier) and an all-star cast of comics’ top talents comes the second stunning oversized hardcover collection of the devastating series that the Onion/A.V. Club calls “one of the most binge-worthy superhero comics currently available”!

Peter Stanchek. Toyo Harada. The two most destructive superpowers in the world— literally — have come to a reckoning of will. In the fallout of their cataclysmic conflict, their former families – the Renegades and the Harbinger Foundation – will lie in shards around them. What will stop these men — either of them — from reducing the world to ashes? The Renegades thought they could get their old lives back. They thought they could bring down Toyo Harada and the Harbinger Foundation. They were wrong. And now their loved ones will pay the price…and their once secret conflict will change the world as we know it.